The FIVB has updated the Men's and Women's Junior and Boys' and Girls' Youth World Rankings with the top 10 in both standings largely unchanged despite the alteration of percentage points. 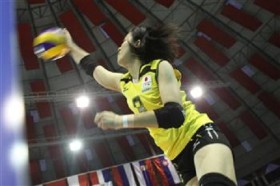 The rankings, which are back dated to January 4, see results from the 2010 Youth Olympic Games downgraded slightly from 100 per cent to 75.

China maintained its top place in the women’s and girls’ table while Japan and Poland are the only two teams to have gained from the change in the top 10, moving to seventh and eighth respectively at the expense of Youth Olympic Games bronze medallists Peru, who drop two spots. Slovakia moved up two spots to 12th ahead of the Games gold medallists Belgium who fall to 13th while Argentina moved up one place above Egypt to 14th.

Thailand were the biggest winners among the front runners, climbing three places to 17th ahead of Algeria, Korea and Tunisia, the latter two falling two and one spot respectively. Korea dropped two places, falling to 19th. The biggest winners in the women’s and girls’ standings were Russia who surged five places to 22nd.

The boys’ youth and men’s junior rankings saw just one change in the top 10, with France leapfrogging Bulgaria into ninth. Iran is the only Asian team in the top 10. China is still in the 11th. Tunisia made way for India and Egypt after they dropped two places to 14th while Greece gained a place to go 15th ahead of Japan, who dropped one spot to 16th. Korea also benefitted as they jumped Canada into 18th as Venezuela remained joint-19th with their North American rivals. Australia and Curaçao gained the most from the alterations, both moving up seven places to joint-47th.