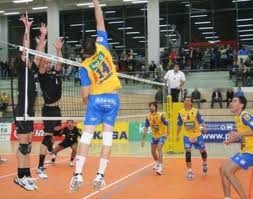 Next opponent of Aich / Dob may be known on Sunday. VCA Hypo Niederösterreich receives UVC Holding Graz and leads in the series 2-0. The coach o f Aich / Dob, Martin Micheu: “There was a clear issue. Now we expect heavy semi-finals.”

SG Raiffeisen Arbesbach celebrated its supreme victory at home of 3:0 (25:13, 25:18, 25:21) over TSV Volksbank Hartenberg. Niederösterreich led with 2-1.The fourth game is on Wednesday in Hartberg.

On Saturday, Niederösterreich celebrated a clear victory .They were especially supreme in block (7:1). The hosts led in attack with 56%: 42%. Reception was even: 80%: 77%.