Two players have received disciplinary actions and have been removed from the training squad. 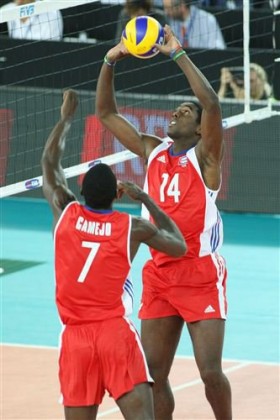 Two players have received disciplinary actions and have been removed from the training squad.

One is the setter from the men’s team, Rayder Hierrezuelo, and the star from the women’s team, Kenia Carcases.

Take note, both players have been instrumental in Cuba’s success within the last 2 years.

Rayder was also suspended from the team last year but rejoined the squad at the 2011 World Cup.

We’re actually more shocked on the case of Carcases.

She is Cuba’s go to hitter and the most effective spiker on the women’s team.

Without her, we have a feeling Cuba will have a difficult time qualifying for the Olympics.

The women’s team are scheduled to travel to Tijuana. Mexico and compete at the NORCECA Olympic Qualification tournament in May.

As of press time, the girls are in Peru to train.

In the last year or 2, some of the best players from Cuba like Robertlandy Simon, Rosir Calderon, Nancy Carrillo and Joandry Leal left the team due to undisclosed reasons and now here’s 2 more players joining the list.

CUB: The Hall in Havana is still under construction