Huge win for Paris in their campaign to go trough the next round of Champions League in Ceske Budejovice over Jihostroj. Noliko got much more easier win at home versus Ostrava. 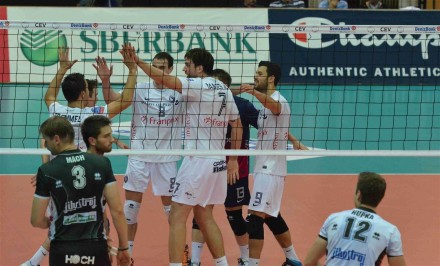 Marko Ivovic and his impressive plays in attack of almost every game this season are paying off as his team Paris, are at the top of the French championship and now he is delivering wins in Champions League.

With his 29 points he was by far the best player on the pitch and was followed up Krisko 18 and Fila 15, from Jihostroj.

Paris got easy wins in first two sets, but home team responded in the third and was able to lower the score to 2-1. Fourth and last set was very exciting. Jihostroj was leading all the way until the very end of the set and then Ivovic and company started to fight. They’ve saved one set point and used their fourth to win the game 1-3 (29-31).

Last game of the matchday was played in Belgium, where Noliko destroyed Ostrava in stright sets. Guests started bad and ended bad. First set ended after only 35 points, as Noliko got the 1-0 with 25-10 score! Yelte Maan was on fire with 15 points and Ostrava couldn’t stop him.

Second set was the only one where there was a bit of excitement but after a tight result in the middle of it 16-15 for Noliko, that was it. Menzel dominated that period of the game wich ended with 25-20 score. There was only a formality left to happen in the final, third set where home team dominated again and won by 25-15.

FRA: Le Cannet back to playoff