Hypo Tirol INNSBRUCK will be hosting the big favorite of Pool F, Halkbank ANKARA with all their international stars this coming Tuesday, November 5, at the Olympic Stadium and is ready to put up a fight so as to bounce back after two consecutive defeats in the prelims of the 2014 CEV DenizBank Volleyball Champions League – Men. 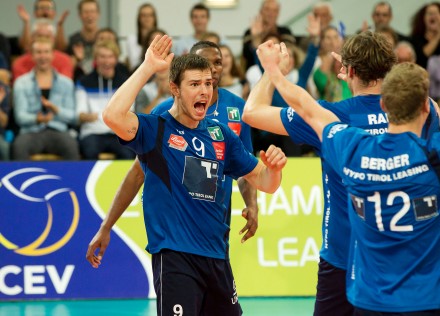 After losing the home opener two weeks ago against Tomis CONSTANTA, Hypo Tirol also had to accept another defeat in their away game with JASTRZEBSKI Wegiel. The performance of the team and the fighting spirit showed during the game in Poland were much better than what the home fans had seen throughout the loss against Tomis and made head coach Stefan Chrtiansky a way more optimistic going into the next matches.

Understanding that with Halkbank Ankara the Tyroleans are facing one the favorites to make the Final Four tournament of the 2014 CEV DenizBank Volleyball Champions League, Hypo Tirol wants to play free of any pressure, with the right attitude, taking a high risk with their own serve and attack and fighting for every single point.

The Turkish team who is leading in Pool F after two 3:1 victories against JASTRZEBSKI and Tomis is expected to come to Innsbruck with the goal of taking 3 points home. Halkbank is preparing well by already arriving in Innsbruck on Sunday afternoon. One of the challenges of the team around head coach Stefan Chrtiansky will be to prepare for the power and strength of the international superstars included in the team from Turkey’s capital city. Osmany Juantorena and Matey Kaziyski build one the strongest pair of outside hitters in the world and already showed that in the first two rounds. Very effective in attack and with great power in serving, both players count themselves responsible for a winning outcome especially if pressure is in the air. The reception players as well as the block and defense system of Hypo Tirol are preparing as good as they can for this high challenge. At the same time the team around captain Alexander Berger knows that they have to pressure Halkbank with their serve and attack in order to be able to compete at this level.

The crowd and the fans of Hypo Tirol are looking forward to welcoming some of the best players in the world and will push their team to put up a fight and to deliver a great performance against a star-studded opponent.