BEL M: Noliko edges archrivals to stay atop of standing in national league

Maaseik, Belgium, March 3, 2012. Belgium’s Noliko MAASEIK does not slow down its pace in the Playoffs of the national league and yesterday scored a 3:0 away win to edge Soleco HERK-DE-STAD, the second team that hails from the Province of Limburg. 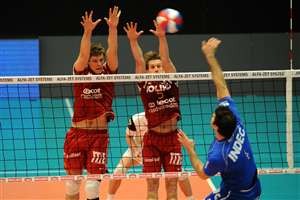 Noliko edges archrivals to stay atop of standing in national league

With Soleco coming from back-to-back wins against Prefaxis MENEN and Top Volley ANTWERPEN, the game was supposed to turn into a tough affair for Noliko especially as many observers were curious to see the attitude and reaction of all players after it was recently announced that head coach Vital Heynen has signed a contract with the German Volleyball Federation.

Team Manager Theo Goyens was evidently happy with the result: “The first two sets were very close and we finally seized them with the same score, 25-23. Afterwards we controlled the third set with more ease, ending up in a 25-18”.

With this win Noliko has a margin of three points on second-ranked Euphony ASSE-LENNIK.

POL: Victories for Olsztyn, Gdansk and Belchatow; Warszawska is 8th