WGCHC W: USA to meet Brazil in first round

The coaches for the six countries competing in the 2013 FIVB Women's World Grand Champions Cup participated in a press conference Monday evening in Nagoya, Japan, on the eve of the tournament's opening day. 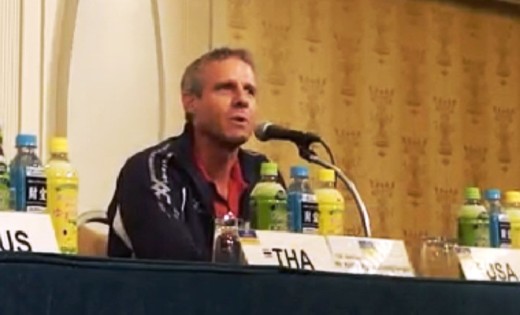 USA national team head coach Karch Kiraly discussed the team’s opportunity to get better in the season-ending tournament. He also talked about Team USA’s opening day opponent Brazil. The teams will face off on Tuesday at 3:40 p.m. (local time)

The U.S., ranked second in the world, opens against No. 1 Brazil for the second consecutive FIVB event in Japan. Brazil won the most recent head-to-head match 3-0 to start the FIVB World Grand Prix in Sapporo on Aug. 28.

The first stage will be held Nov. 12-13 at the Nagoya Nippongaishi Hall, which seats 10,000 fans. After a travel day on Nov. 14th, the teams resume action Nov. 15-17 at the 5,000-seat Tokyo Metropolitan Gymnasium, which was used during the 1964 Olympic Games and completely remodeled in the early 1990s.

Team USA will face Japan on Nov. 13th and will try to improve to 6-0 against its Asian rival this year. After the travel day, the Americans challenge Russia on Nov. 15th. Team USA defeated Russia 3-1 on the opening day of the 2013 FIVB World Grand Prix.

The USA Women qualified for the World Grand Champions Cup by winning the Visit Omaha NORCECA Women’s Continental Championship, which was held Sept. 16-21. Team USA defeated Mexico and Cuba in pool play, Canada in the semifinal round and No. 8 Dominican Republic in the championship match.

How to use physical therapy to relieve back pain