Russia denied Brazil a chance to clinch the gold medal with a five-set (20-25, 22-25, 25-21, 25-17, 15-9) victory on Saturday in the World Grand Champions Cup. The result left both teams with 3-1 records in what was a rematch of the 2012 Olympic final won by Russia in similar fashion. The match marked the first meeting ever between Brazil and Russia in the World Grand Champions Cup. It was the 60th match overall between the countries, with Brazil leading 32-28 alltime. The South Americans came into the match knowing that a 3-0 or 3-1 victory would clinch the gold for them and took the initiative from the outset. Dmitriy Ilinykh paced Russia with 21 points, while Dmitriy Muserskiy added 22. Wallace De Souza led Brazil with 21. Ricardo Lucarelli contributed 14. Both sides featured huge serves throughout the match, but Russia persevered and prevailed in the end. After falling behind two sets, the Russians dug deep and went on the attack. 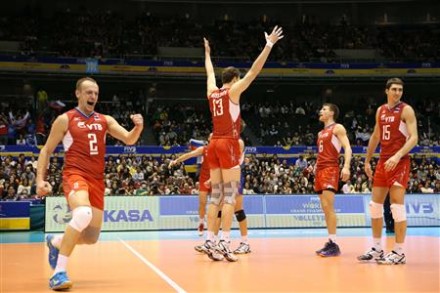 Brazil jumped out to a 5-1 lead in the opening set. Bruno Rezende’s spike sent Brazil into the first TTO with an 8-4 lead. Brazil boosted its lead to 12-5 and Russia called a timeout. Apalikov fired a serve long and it was 22-17. After Mikhaylov served into the net Brazil was two points from the set at 23-18. Lucas sent a spike wide and Russia moved within three at 23-20. Brazil then took a timeout. Ricardo’s spike gave Brazil set point at 24-20. Brazil took the set 25-20 when a fortuitous return landed just inside the sideline mark.

Mikhaylov notched seven points in the set, while Ricardo had six. Lucas delivered a perfectly place serve for an ace and Brazil was up 15-12. Brazil led 16-12 at the second TTO.A block by Sidnei Dos Santos put Brazil’s margin up to six at 19-13. Russia then scored four in a row to make it 19-17. A block by Muserskiy made it 23-21. Lucas then hammered a spike and it was set point at 24-21. Mubserskiy then served into the net and Brazil took the set 25-22.

Russia led 8-6 at the first TTO in the third set. A block by Andrey Ashchev moved Russia back within one at 16-15. Russia then equalized when Wallace’s spike hit the antenna. Mauricio gave Brazil back the lead 17-16 a spike that floored Muserskiy. Muserskiy’s spike made it 22-21 as Russia fought to stay in the match. Ilinykh hit Evandro Guerra with a serve as he tried to get out of the way and it was 23-21. Pavlov gave Russia the set 25-21 with a spike.

A spike by Ilinykh made it 5-2 for Russia as they retained the momentum from the previous two sets. Russia made it 8-4 by the changeover. Maruico’s spike made it 9-5, but Russia was relentless as it drove for the line. A block by Evgeny Sivozhelez made it 12-6 and the result was all but academic. Sivozhelez made a kick save to keep a ball alive and Russia gained match point at 14-8. Wallace fired a serve long and Russia claimed the match 15-9.

THIS IS NUTS! Crazy warm-up spike by...