Uganda registered their first win after defeating Burundi 3-0 (25-21, 25-19, 25-17) on day two of the FIVB World Championship zone 5 (Pool Q) qualification tournament held at the Amahoro Sports Complex in Kigali, Rwanda on Wednesday. It was Burundi’s second consecutive loss in the tournament while reigning African champions Egypt saw off Rwanda 3-1 (31-33, 25-23, 25-14, 25-16) in the second game of the day. Egypt lead the five nation tournament 2-0, while Rwanda dropped 1-1. 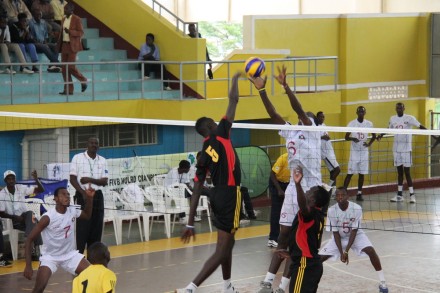 With a full house at the Amohoro Sports Complex and the cheering on their local heroes, Rwanda coach Paul Bitok kept on altering his side as junior players gauged themselves against African’s best volleyball playing country.  Rwandan captain Christopher Mukunzi was impressed with his team’s performance despite their loss.

“We played a good game, the young boys realised what it is like to play against a good side,” said Mukuzi. “I am sure it’s one experience that will make the team (Rwanda) stronger,” he added.

It was a game that Uganda badly wanted to win to brighten their chances of reaching the FIVB World Championship continental qualification stage. They won 3-0 (25-21, 25-19, 25-17) with Antony Ndawula resting the more senior players on the team, opting instead for the younger and lesser known team members. Though many had played for Uganda before, it was a proud moment for Ivan Ongom Bob who made his international debut mid-way through the second set.

“I waited for this day from the time l started playing volleyball in high school,” Ongom said. “I enjoyed myself in national colours and made some points but putting on the black and yellow outfit is a moment I will cherish,” he added. It was the third time Uganda and Burundi met in recent times with Uganda coming out on top in all the matches.

Get ready for something spectacular… Sons of...