CL W: 5 teams share immaculate record after third round comes to a close

After completion of the third round in the prelims of the 2014 CEV DenizBank Volleyball Champions League – Women, there are five teams with an immaculate record of three wins in as many matches. If last year’s gold and silver medallists VakifBank ISTANBUL and Rabita BAKU have lived up to their status and to all expectations, Italy’s rookies Prosecco Doc-Imoco CONEGLIANO have turned into the major sensation of the competition especially after edging Azeryol BAKU on Thursday night coming back from 1:2 down. 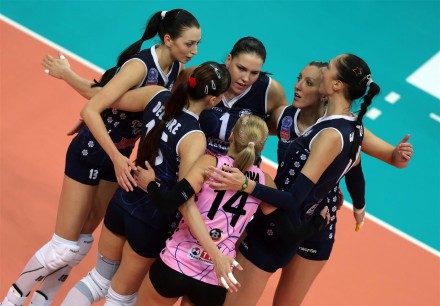 Actually the best record so far belongs to Eczacibasi VitrA ISTANBUL for the team from Turkey’s megalopolis has swept all of their matches and conceded no sets at all to their opponents. On Thursday they edged France’s multiple champions RC CANNES in three close sets to keep their immaculate record in the competition and cement their leadership in Pool D. Their compatriots of VakifBank also have maximum points – nine – after three rounds but on Tuesday they lost their first set to Poland’s champions Atom Trefl SOPOT. The side mentored by Giovanni Guidetti did nevertheless not stumble and stormed back claiming a 3:1 victory to prolong their terrific winning streak to 63 matches in a row and top the charts in Pool C with nine points. Russia’s champions and 2012 bronze medallists Dinamo KAZAN (see picture) also have three victories to their account and only dropped one set so far in the competition thereby leading the way in Pool F where Switzerland’s Volero ZÜRICH finally claimed their first win this week to bounce back from a poor start of their campaign.

Azerbaijan’s Rabibta BAKU also have a 3-0 win-loss record so far but since they claimed their first home game with Omichka OMSK REGION at the tie-break, they “only” have cashed eight points so far to nevertheless comfortably top the tables in Pool A. Italy’s Prosecco Doc-Imoco CONEGLIANO continued on Thursday their fairy tale as they beat Azeryol BAKU 3:2 to follow on their home victory over Galatasaray Daikin ISTANBUL and away win against Unendo Yamamay BUSTO ARSIZIO to cause the major surprise of the competition so far and keep first place in Pool E. As for the remaining group, three teams – Dinamo MOSCOW, Igtisadchi BAKU and RebecchiNMeccanica PIACENZA – all have two victories each in Pool B where the battle for the Playoffs 12 will be tough up to the very end.

The competition will resume next week with the fourth round and draw to a close on December 17; the first and second-placed teams of each Pool will make the Playoffs 12 and from there re-start their quest for the crown that will be at stake mid-March.