African champions Egypt secured the gold medal at FIVB World Championship zone 5 (Pool Q) qualification tournament after their fourth victory in row over Burundi 3-0 (25-16, 25-14 25-17) in the competition day 4 held at Amahoro Sports Complex in Kigali, Rwanda on Friday. Kenya regained the winning rhythm and achieved the first victory over Uganda 3-0 (25-23, 25-23, 25-18) after two narrow defeats in thrilling tiebreaks against Egypt and Rwanda. Egypt finished their match with a win-loss ratio of 4-0 to secure the top of zone 5, however they already confirmed a place in the final phase being one of the top three African teams in the FIVB World Ranking. Rwanda came second with 2-1 and 5 points, and Kenya third with 1-2 ratio and also 5 points. 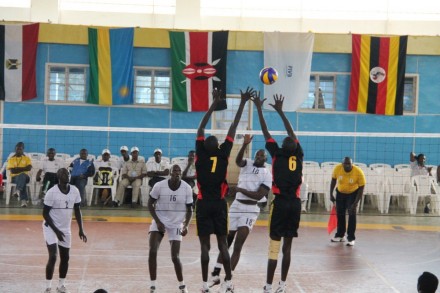 Despite the defeat, Burundi put up their best performance of the qualifiers so far. The score line might have read 3-0 (25-16, 25-14 25-17) but Burundi got a lot of cheers from the crowd with their ‘I don’t care attitude’ they brought to the game.

Burundi, through their libero Bryand Mugabowangabo, defended well on the back row, picking most of the had spikes from Ahmed Kotb keeping the rallies longer than expected. Egypt lost a number of services and defended poorly on the net.

At some stage midway the third set, Burundi found themselves in a 13-10 lead which they shortly dropped and eventually lost the set 25-17.

With a win against Uganda in the bag, Kenya are one win away from securing qualification to the continental round of the 2014 FIVB World Championships. Kenya and Uganda were coming off defeats by Rwanda and Egypt respectively, and were both desperate but Kenya were hungrier than Uganda on the day coming out 3-0.

It was man of the tournament contender Philip Maiyo whose jump service was quick to give Kenya a comfortable 8-5 going into the first technical timeout. At 20-17, Uganda’s Emma Kato served four times to give Uganda some hope leading 21-20, but character prevailed as Kenya took the set 25-23. It was the same set score in the second set and by the third; Uganda had lost it losing 25-18.

With three games and just one win, Kenya have collected five points – just like Rwanda.

RUS W: No problem for Omichka