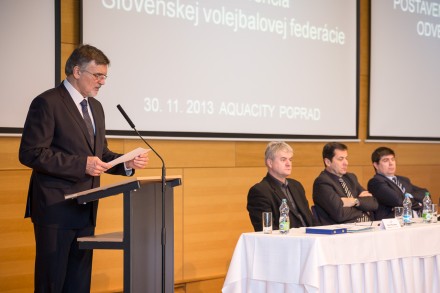 Halanda received 50 of the 53 votes cast by the delegates in attendance as he was the only candidate running for the presidency. “Though there was none else applying for this position, I am very glad that I could get another mandate and that the absolute majority of the delegates have supported me” Halanda said. “The results of this election show that under my leadership people think that we have worked well and that we all share the intention to continue in this way. We have plans and a vision for the future and we also know what we want and need to change. Our priority is to achieve good results with all of our national teams; we want to develop Volleyball among the local youth and find  good ways to support our clubs” Halanda continued in his address.

Halanda, who is a member of the CEV Board of Administration since 2011, is also a Vice President of the Slovak Olympic Committee. Actually he had not much time to celebrate his re-election for shortly after the end of the Assembly he had to catch a flight to make it to Lausanne and attend the FIVB World League Council. “This is a very important meeting for us and we are pleased that the FIVB is considering our Federation and national team as a potential candidate to join this competition. We will start working hard immediately after the General Assembly for in about one month our men’s and women’s national teams will join the third and last round of the World Championship qualification. We are also preparing for next year’s CEV U20 Men Volleyball European Championship that we will co-host with our neighbors from the Czech Republic. We really have a lot of work ahead. I am sorry that I could not celebrate my re-election with my close friends and colleagues but the meeting in Lausanne is really important and we will certainly find some time to celebrate in the near future” Halanda stated.

Halanda is a former Volleyball player who recorded 76 caps with the Czechoslovak national team, a former national champion (3 times) with the likes of CH Bratislava, who later in his career played in Italy’s first and second division from 1983 through 1987. After ending his career, he switched to Volleyball coaching spending 2 years in Italy and another two in Saudi Arabia; he mentored the club of Slavia EU BRATISLAVA in the 1992/1993 season and was at the helm of Slovakia women’s national team from 1993 through 1997. He also was the General Secretary of the Slovak Volleyball Federation from 2001 through 2005 before assuming its Presidency.