As the second feature as part of an end-of-year review series, www.fivb.org looks back at the FIVB Volleyball World Grand Prix 2013 where Brazil returned to the top of the podium for a record ninth crown. 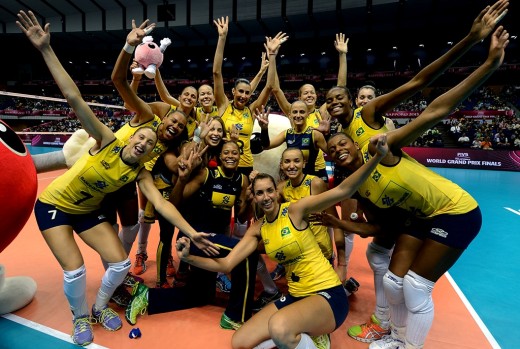 The 2013 FIVB World Grand Prix was not lacking in shocks and surprises. From USA missing out on a medal after three straight golds to the rebirth of China and the expansion of the tournament to 20 teams, there was a feast of world-class volleyball for fans around the globe.

Three figures in particular show just how close the competition was: No team made it through their 14 matches undefeated; 24 of the 105 matches had to be decided in a tie-break; and 11 teams went into the final week of the Preliminary Round still harbouring hopes of making it to the Finals. Even eventual winners Brazil were made to fight for their place among the top six teams in the Finals.

His team’s incredible run of 18 wins in a row in the competition came to an end in the Preliminary Round with a 3-1 defeat to Brazil. The U.S. lost four in a row in the Finals before eventually grabbing a consolation 3-2 win against hosts Japan, but even that wasn’t enough to stop them finishing in sixth place.

“This has been a challenging week,” Kiraly admitted. “We lost four straight matches. The positive was the nice Preliminary Round we played; the difficult part was seeing how good we need to be to compete on the world stage. We learned a lot this week. They were not easy lessons, but we learned a lot.”

Even the eventual top two, Brazil and China, had their moments. The South Americans lost to Bulgaria in the Preliminary Round, while China were on a run of 13 straight wins before meeting the Olympic champions in the final, deciding match.

Tournament debutants Bulgaria were the surprise package of the World Grand Prix. They beat Japan 3-0 and only just missed out on a place in the Finals when they lost 3-2 to USA, a performance that drew praise from USA coach Kiraly.

“They played a tremendous Grand Prix,” he said. “They have an exciting future with many young players.”

Bulgaria’s exciting form was largely down to coach Marcello Abbondanza, who is beginning to put together a new volleyball power.

“I have been very proud of my team throughout this entire World Grand Prix,” he said. “It’s our first time in the Grand Prix and first time at the international level. We showed the power of our team in this Grand Prix.”

Although Italy finished fifth in the Finals they at least had the consolation of having a new star, Valentina Diouf, become the leading scorer after she racked up 110 points for her side.

There was no such consolation for Finals’ hosts Japan, whose wait for a World Grand Prix podium finish continues after they lost to Serbia in the match that decided the bronze medal.

“The team made mistakes at important points and it’s natural that if they blow chances then they don’t win,” said Japan coach Masayoshi Manabe. “But this tournament, with these young members playing against the top teams in the world, will be valuable for the team. However, I’m not satisfied because we only won one match. In matches that go to five sets it seems that this team can’t win, so we have to address that.”

Next year sees a new system and a record 28 teams in the World Grand Prix, and promises to be even more exciting.