The NORCECA Confederation has confirmed the dates and host countries for the third and final round of its qualification tournaments towards the FIVB Volleyball World Championships 2014 to be held in Poland (men) and Italy (women) next September and October. 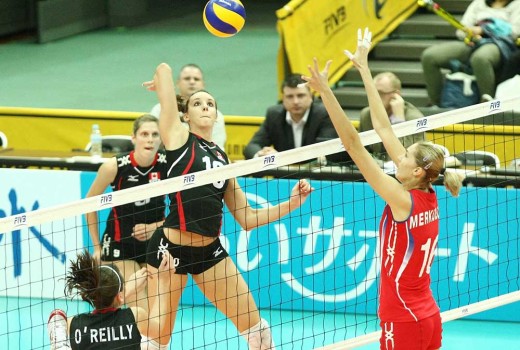 The women’s third phase features 20 teams divided in five pools of four teams where the winners of each pool will be granted a direct ticket to the finals in Italy, which will be held from September 23 to October 12.

Cuba will host the Pool Q from May 5-11, where Barbados, Curacao and Nicaragua will battle the host Cuba for the berth in Italy.

Pool O will be contested in Colorado Springs, United States where the home team will compete against Guatemala, Panama and Honduras from May 13-19.

In the same dates, hosts Trinidad & Tobago will be welcoming the Dominican Republic, El Salvador and Saint Lucia in Pool P, while Canada will receive Mexico, Jamaica and Guadeloupe in Pool S.

The fifth Pool R will take place in Puerto Rico with the home side joined by Costa Rica, U.S. Virgin Islands and Haiti from May 20-26.

The FIVB Volleyball Women’s World Championship Italy 2014 NORCECA playoff to be played between the second placed teams of the five third-round events is scheduled in Trinidad & Tobago from June 2-9.

Sixteen teams will be participating in the men’s qualifiers divided into four pools of four also with a final qualification event for the runner-ups of these tournaments. The four pool winners will be granted a berth in Poland from September 3-18.

Cuba will organize Pool P playing teams from Barbados, Dominican Republic and Suriname from May 12-18, while Colorado Springs in United States is hosting city for teams competing in Pool O which are Costa Rica, Haiti, Honduras and hosts United States from May 13-19.

Also from May 13-19, Canada will host Pool Q contesting the teams from Guatemala, Panama and Trinidad & Tobago while Puerto Rico will serve as home of Pool R with the local team competing against Bahamas, Mexico and Saint Lucia from May 20-26.

The FIVB Volleyball Men’s World Championship Poland 2014 NORCECA playoff will take place either in Mexico or Puerto Rico from July 7-13.