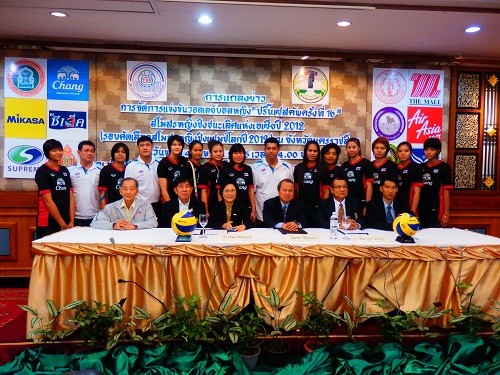 The nine-day tournament will also serve as the Asian qualifying round for the FIVB World Club Volleyball Championship to be held later this year in Qatar. Only the winning team from the Asian Club Championship will secure a berth to pit their expertise in the top-flight world meet.

The annual championship has attracted a total of 10 teams across the continent to vie for the top honour. However, Kuwait withdrew ahead of the competition resulting in only nine teams to battle it out for the crown.

The General Technical Meeting is due to take place at Sima Thani Hotel on April 20, with the Welcome Dinner and Opening Ceremony being held later on the same day in the hotel.

The pool round-robin preliminaries kick off on April 21, with Malaysia taking on Sri Lanka in the curtain-raisers. The other matches on the opening day see Vietnam play Myanmar, Kazakhstan challenge China and Japan pitted against the host side.

Thailand has actually planned to stage the 16th Princess Cup Women’s Volleyball Invitational Tournament this year. However, given the AVC’s green light to host the 13th Asian Women’s Club Volleyball Championship, the Thailand Volleyball Association has decided to merge both tournaments to be held at the same time and at the same venue.

Since the tournament’s inception in 1999 in Ubon Ratchathani, Thailand, China has won a majority of five titles including two from Shanghai Cable TV in 2000 and 2001. Tianjin Bridgestone added three more to their tally after winning it in 2005, 2006 and 2008.

Thailand captured three titles, with Federbrau handing the country the maiden crown in 2009 in Nakhon Pathom, Thailand following the dramatic 3-2 win over China’s Tianjin Bridgestone in the gruelling, hard-fought contest. Federbrau repeated the similar feat a year later in Gresik, Indonesia after beating Zhetysu Almaty 3-1 in the showdown. Thailand, under a brand-new Chang Club, registered the hat-trick of victory in Vinh Phuc, Vietnam following a scintillating 3-0 win over Tianjin Bridgestone.

On his target of retaining the title at home, Chang’s head coach Kiattipong Radchatagriengkai said, “A total of 19 players including young talents turned out for the intensive training in preparation for the Asian Club meet. Four main players are still playing in international leagues including setter Nootsara Tomkom and libero Piyanut Pannoy and due to join the team on April 10. Staff coaches will keep their watchful eyes on individual performances before we next select the best 12 players for the Asian Club meet.

“We will try our best to defend our title. However, the Asian Women’s Club meet in Nakhon Ratchasima will serve as our tune-up match ahead of our tougher matches in the Asian Olympic Qualification Tournament (to be jointly organised with the World Olympic Qualification Tournament in Japan between May 19 and 27). We hope high to finish among top four in the Japan meet,” said Kiattipong.