Prolific scorer Dominican Bethania De la Cruz continues to show her offensive exploits in the Korean Women’s League as she helped her GS Caltex team to reach the final series of the 2013-2014 season. 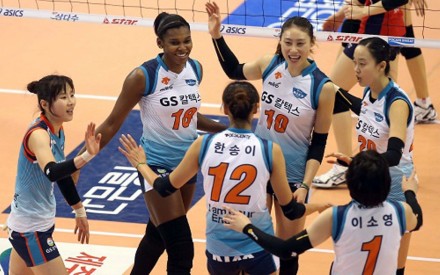 The potent outside hitter, who led the last edition of the FIVB Women’s World Cup in scoring and serving aces, was instrumental in the two victories of GS Caltex over KT & G Ariels in the best-of-three semifinal series.

The final series scheduled to kick off on Thursday March 27, features what can be projected as a duel between two players who have centered a traditional sport rivalry of years as Puerto Rican Karina Ocasio represents the main offensive force of IBK team, winners of the regular series.

“I am very happy about my individual performance and for helping my team to reach the final series,” De la Cruz said. “I am looking forward to continue on a roll and hopefully winning the championship.”

RUS M: Grbić – “We have to change something”

ONCE IN A LIFETIME: Leg point for top division ticket! (VIDEO)