Dutch and Norwegian teams work together ahead of European qualifiers

The U20 men national team of Norway travelled last week to the Netherlands for a joint training camp with the young “Oranjes” ahead of the second round of qualifications for this year’s European Championship. 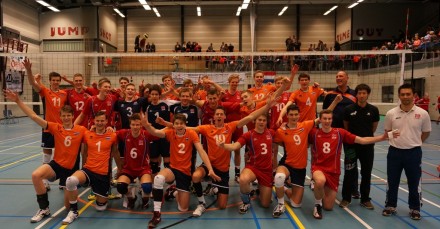 Though Norway had to accept three defeats, it was nevertheless a great experience for the young players coached by Haruya Indo who could travel to the Netherlands and play a very competitive team ahead of their tournament in Romania. “We are very grateful to our Dutch friends and to their Federation who accepted our request and helped us in our preparations,” Indo says. “I know Ron Zwerver very well because he played for ten years with my former mentor Arie Selinger who now coaches Israel women’s national team. Norwegian teams have visited the Netherlands in 2011, 2012 and this year as well, so we can say that these exchanges have become a tradition and they have also fostered our friendship,” he continues.

The camp was professionally organized by the Dutch Volleyball Federation with the teams staying at only 100 m from the sports hall where they practiced every day, so the Norwegian squad could not ask for a better way to fine up their preparations for the tournament in Piatra Neamt. “We hope that one day we will be able to pay back our Dutch friends for their help and do the same for their team if they come to Norway,” Indo concludes. “We have a very limited budget and are not so experienced, but in Romania we will be trying our best as we always do.”

ITA W: Ladies and gentlmen, Busto is back!