Lokomotiv KHARKIV won its sixth consecutive and fourteenth overall in history national title of Ukraine. The 2014 CEV Volleyball Challenge Cup - Men participant from the politically troubled region won all three matches of the home leg of the Final Four tournament to claim the gold medals from the Ukrainian domestic championship. Having also won the national cup earlier in the season, Lokomotiv is closing a successful season with a golden double. 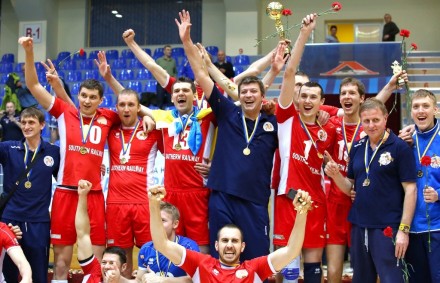 The team from Kharkiv started the season as a participant in Russia’s Superliga championship, but withdrew following the political turmoil that hit the two neighboring countries this year. Having skipped the regular season of the Ukrainian championship, Lokomotiv was entitled to a direct ticket to the playoffs.  In the two matches of the quarterfinal series their clubmates from Loko-Ekspres KHARKIV gave them some hard time, but not enough to cause any surprises.

In addition to Lokomotiv, the teams of Favorit LUBNY, Khimprom SUMY and Crimsoda KRASNOPEREKOPSK also passed through the quarterfinals successfully to qualify for the Final Four, which was played in two single-round-robin tournaments – one hosted by Favorit and the other – by Lokomotiv.  No team managed to survive unbeaten through the first leg in Poltava with the home side Favorit topping the standing with 6 points, followed by Lokomotiv with 5.  On the second competition day of the second leg in Kharkiv, however, Lokomotiv and Favorit locked horns again in what was a de facto final battle for the crown.  The home guys won by 3:1 (23-25, 25-12, 25-23, 25-18) to overpass their opponents in the table and all they had to do on the following day to defend their title was to beat fourth-placed Crimsoda.  And so they did.  Inspired by the home crowd, Lokomotiv won by 3:0 (25-20, 25-22, 25-14) to triumph with the trophy.
In what turned out to be a direct clash for the second place, Khimprom defeated Favorit by 3:1 (28-26, 25-20, 23-25, 25-22) to claim the silver medals and leave the team from Lubny with the bronze.
In addition to a best player of each Final Four team being named, the following individual awards were presented: 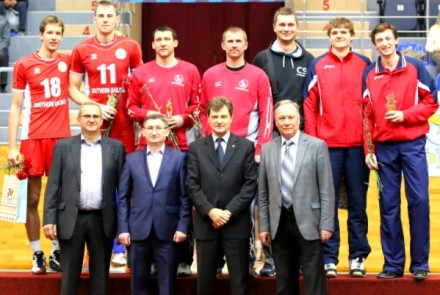