Crvena Zvezda BEOGRAD added another trophy to its already unique showcase as the ladies emulated their colleagues from the men’s team to claim Serbia’s national league for the twenty-sixth time in history. The players in red and white jerseys edged their opponents of NIS Spartak SUBOTICA with the score of 3:2 (18-25, 25-27, 25-21, 26-24, and 15-12) to finish the Championship series with a 3-1 and retain the crown for the third consecutive season. 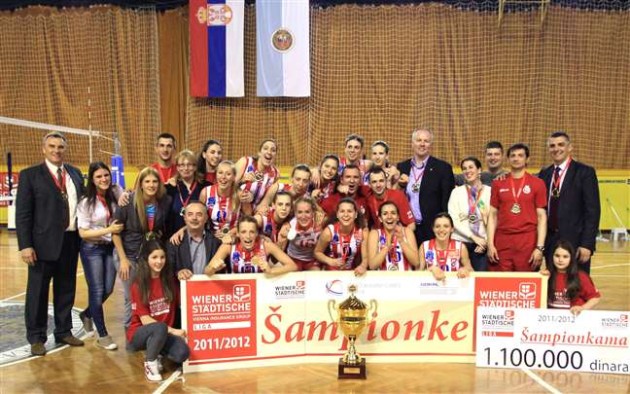 The last match of the final series was played in a great atmosphere with around 3’000 fans in attendance at “Dudova Suma” sports hall as Crvena Zvezda and Spartak displayed some high-class Volleyball.

After 133 minutes of incredible play Crvena Zvezda could finish it off after bravely storming back from two sets down, thereby showing great fighting spirit and the ability to score the points that determined the final outcome of the match.

As for Subotica, the result of this year’s national league confirms that the city is gradually turning into one of the major Volleyball “hubs” in Serbia and Spartak will evidently come back next year with the intention to take that much wanted crown.

Ana Bjelica, captain of Crvena Zvezda, was presented by Mr. Goran Cato, President of the Association regrouping all clubs competing in Serbia’s first division, with the trophy for the winning team before receiving a check for 1.1 million RSD (around 10’000 €) from Nenad Jovanovic, member of the management board of the Wiener Städtische insurance group, the title sponsor of the Serbian Superleague.

The consolation trophy for the second-ranked team was presented to the captain of NIS Spartak SUBOTICA, Danica Radenkovic, by Ms. Ana Avramovic, Vice President of the Association representing all of Serbia’s first division clubs.

As they finished atop of the standings in the Superleague, Crvena Zvezda and Spartak have got the right to participate in the 2013 CEV Volleyball Champions League as Serbia has got two spots for this competition as per the relevant European ranking list.