Flavio Gulinelli will be mentoring Portugal men’s national team for this season as recently announced by the Portuguese Volleyball Federation whose headquarters played host to a press conference whereby the 53-year old Italian coach was introduced to the national media by President Vicente de Araujo and Mr. Antonio Sá, the main responsible for the activities of the squad. 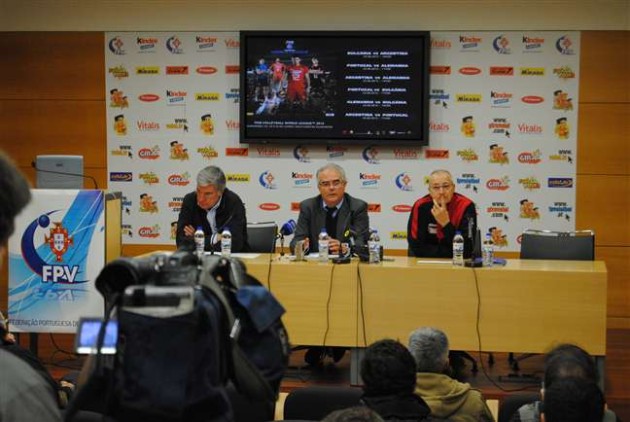 “We are extremely glad to introduce Mr. Gulinelli to our Volleyball family” said Araujo, “a well-known coach who deserves our full trust and has a CV that speaks for itself. We also have to thank our former coach Juan Diaz who did a lot for the development of our national team, as he was coaching the group while finishing eighth at the 2002 World Champs in Argentina, qualifying twice for the final round of the European Championship and winning the European League back in 2010. With his guidance Volleyball in Portugal has approached the world’s elite and such great results have opened the doors of European top clubs to some of our players” stressed the President of the Portuguese Volleyball Federation while addressing the many journalists and media in attendance at “Dr. Fernando Jorge de Araujo Barros” auditorium.

“Our main goal remains to qualify for the final round of the 2013 European Championship which means we will be again part of the world’s Volleyball elite since most of the real Volleyball powers are from this continent. As for the 2012 FIVB World League where we have been assigned to a preliminary group comprising Argentina, Bulgaria and Germany, we will use it as an opportunity to test some young players. Our head coach will start scouting these players since he already knows most of our veterans and then select a group that will join the World League as well as the European qualifiers” stressed Araujo to recap the main goals for the upcoming season.

Gulinelli, who addressed the audience in Portuguese, said: “I know that I have a difficult task ahead but I have been taking up many challenges throughout my career as Volleyball coach and this one is actually quite attractive. Portugal has a good tradition in Volleyball and disposes of some excellent players as well as of young guys with a good potential. I think this is not the time to make any promise but actually to start working hard”.

Gulinelli is replacing Cuban-born Juan Diaz at the helm of the national team after some very successful years for the group: “Portugal has some experienced players who may be part of the group also in other top national teams. My responsibility is to convey my experience to all players who will finally join the group and play for the national team. I feel very excited to start this adventure and am quite optimistic as far as the qualification for the 2013 European Championship is concerned”.

Portugal will organize the third round of action for the prelims of the FIVB World League by hosting Argentina, Germany and Bulgaria at “Multiusos de Guimaraes” sports hall through next June 22-24.