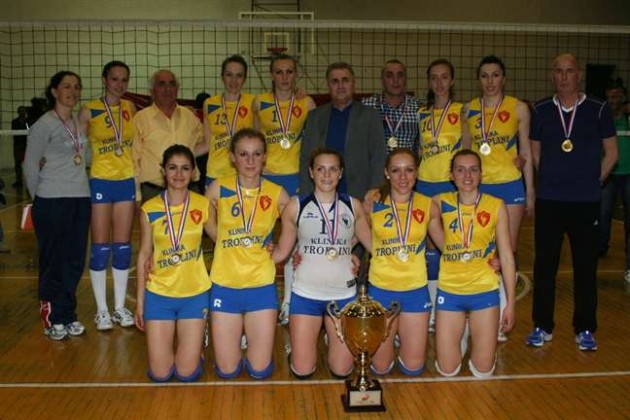 The Championship series lived up to all expectations with every single game being so tight that its eventual outcome was regularly decided by the very last rallies.

Minatori opened the Playoffs finals by scoring a 3:1 home win but UMB Volley responded with a 3:0 in Tirana to draw level.

However, the major highlight of the series was the third clash where Minatori went up 2:0 and most probably thought it was going to cruise to a comfortable victory before UMB Volley stormed back to seize set 3 and 4 to shock the audience in attendance at “Arjana Arapi” sports hall, the home of Minatori.

The tie-break that followed could not have been more thrilling and exciting, as UMB Volley started off with a great pace, going to the front with a pretty reassuring margin (12:8) before the story of the game changed once again and Minatori could complete an amazing comeback by taking the tie-break at 20-18 as well as its second win in that Championship series.

Yesterday Minatori opened again strongly, pocketing the first and second sets (25-22 and 25-18), before UMB Volley found back its best play (25-17) to re-open the game. A real marathon followed in set 4 which was eventually finished by Minatori with the terrific score of 33-31, thereby firing up the celebrations for a second consecutive title.

“This was just an incredible game, as I had the impression that it was never going to end. Anyway, we are happy with this win and especially with being national champions for the second time” said team captain Esmeralda Tuci.

“I joined the team halfway through the season and I think we finally did a good job” added head coach Hasan Gurabardhi. “I would like to thank all those who believed in me and I think we have reached our goals by taking this well deserved title. I want to thank all my players because they did always play at 100% in this last section of the season”.