Invincible Tianjin Bridgestone and Toray Arrows were locked in a very tight contest before the Chinese giants beat the formidable Japanese in a hard-fought five-set thriller to capture the Princess Cup Asian Women's Club Volleyball Championship at The Mall Nakhon Ratchasima's MCC Hall on Sunday. 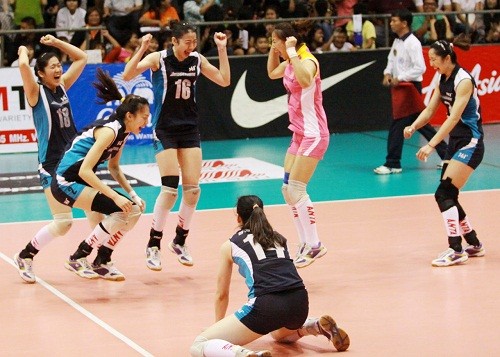 Following the great success, Tianjin captured the prestigious trophy of HRH Princess Maha Chakri Sirindhorn and a berth to test their mettle in the 2012 FIVB World Women’s Club Championship, which is due to take place later in Doha, Qatar from October 13 to 19.

The Tianjin’s magnificent come-from-behind 21-25 25-18 25-23 17-25 18-16 victory over Toray stretched the China’s authority over the annual top-notch tournament to six times in history. Shanghai Cable TV team sealed victory in 2000 and 2001 and Tianjin claimed the remaining four.

Tianjin, the eight-time winners in the Chinese Volleyball League, landed their maiden Asian Women’s Club title in 2005 and continued their supremacy in 2006, 2008 and 2012.

The Chinese lost their crown to hosts Federbrau in 2009 in Thailand in the thrilling climax. Tianjin faced the similar fortune when they succumbed a straight-set defeat to Thailand’s Chang (formerly Federbrau) in Vinh Phuc, Vietnam last year.

Contesting their sixth final in the Asian Women’s Club Championship, the gritty Tianjin, which stunned the defending and consecutive three-time winners Chang in comfortable three sets in the Saturday’s semi-finals, had a strong roster in two powerful hitters Chen Liyi and Yin Na in a heart-pounding encounter against the never-say-die Toray Arrows.

The spirited Toray, cheered on by a number of noisy supporters carrying the Toray banners, were strengthened by powerful attackers Arisa Takada and Kaori Kodaira. The Japanese came out in full force, taking the Tianjin’s aggression to the limit with their gutsy display to take the opening set 25-21.

Explosive Yin Na and Zhang Xiaoting were the Chinese side’s comeback when they tore the Japanese defence apart with their exceptional spikes before handing Tianjin the win in the next two sets 25-18 25-23. In the crucial fourth set, the Japanese played an impenetrable defence, allowing the mighty Tianjin tough times to score. Toray stormed on to clinch the set 25-17.

The do-or-die tie-breaker thrilled the audience packing the competing venue from the start to the end. Both sides came all-out to topple each other with exceptional skills and form.

As the on-going battle was hotly-contested, Tianjin took a narrow 17-16 lead. Yin Na produced a great serve, but the Japanese side were in good position to keep the ball rolling. Kaori Kodaira attacked fiercely at the net, but the taller Chinese blockers were ready out there and were just impenetrable.

Seeing the ball blocked in, the Tianjin players jumped for joy and hugged one another. As the Chinese players danced in a circle for their fourth success in the championship, Toray Arrows left the venue with their heads low in great despair.
Zhang Xiaoting scored a match-high 23 points including 19 kills and four solid blocks for Tianjin, while Arisa Takada top-scored 25 points for Toray.

Earlier, the third-place play-off between Chang and Kazakhstan’s Zhetyssu saw the host side in great form both defensively and offensively. Powerful Wilavan Apinyapong and Onuma Sittirak took turns tearing the Kazakh defence into shreds with their explosive attacks.

Winning the first two sets 25-21 25-10, Chang, despite taking the height disadvantage of 175cm against the visitors’ 182cm, continued their winning streak in the third set. With home crowds cheering them all the ways, the Thai team played every part of the set well to capture the thrilling battle 25-18 and the third place.