Two unbeaten teams, China's Tianjin Bridgestone and Japan's Toray Arrows, set up clash of the titans in the final showdown of the 16th Princess Cup Asian Women's Club Volleyball Championship to battle it out for a place in the FIVB World Women's Club Championship later this year in Qatar. 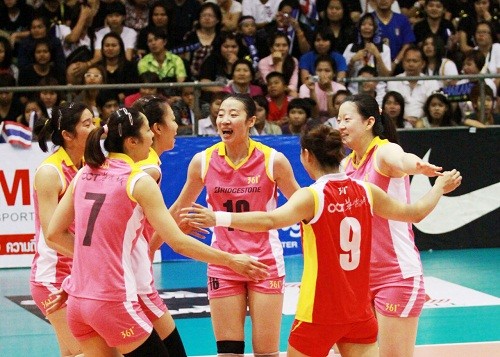 Tianjin, the eight-time winners in the Chinese Volleyball League and the three-time champions in the Asian Women’s Club, stunned the defending champions and hosts Chang in comfortable straight sets 25-14 25-20 25-19 in 64 minutes in the Saturday’s semi-final encounter.

The humiliating loss not only sank the hearts of a large number of the home crowds packing The Mall Nakhon Ratchasima’s MCC Hall on Saturday, but also shattered the Chang’s dream to defend their Asian Women’s Club three times in succession on home soil.

For the Chinese giants, it was also a sweet revenge for the loss in the final clash to Chang at the previous edition in Vinh Phuc, Vietnam last year, where they succumbed a straight-set loss to the Thai counterparts.

As Tianjin were led by powerful hitters Yin Na and Chen Liyi, who joined the China national team in the last year’s FIVB World Grand Prix and Chen alone in the FIVB World Cup in Japan, the host side were represented by high-profile players who have been playing for a long time under the Chang’s banners to seal the maiden Asian title in 2009.

Terrific Chen Liyi turned a scoring machine for Tianjin as she attacked powerfully at the net and blocked effectively. After conceding the first two sets 14-25 20-25, the Thai players maintained their poise and stormed back gallantly, entertaining the noisy drum beating, cheering home crowds with spectacular spikes.

However, the Thais’ determined attempts were to no avail as the well-established visitors read the rivals’ game well. Tianjin took the splendid offensive combinations from the attack hits by Chen Liyi and Yin Na and solid blocks by Chen and Li Ying to pack off the hosts 25-19 in the third set to book a final berth.

Hard-hitting Chen Liyi of Tianjin scored a match-high 17 points including 14 kills from 25 attempts, while powerful Onuma Sittirak topscored 10 points for the home side.

After the match, Tianjin’s head coach Wang Baoquan expressed his satisfaction over his team’s success. “We played very well in this match against the strong Thai team. Everyone did a good job. Chang players also fared well, but they made too many mistakes on the first-ball reception. Their blockings are also not working well as they always were in the previous tournaments we played together.”

“Despite the loss, I admit that the Thai team are one of the strong sides we have to be reckoned with. I think it’s not easy to beat Thailand, especially when you play them on their home soil. Against Toray Arrows in the final, I think we will face a daunting task out there. The Japanese players are very fast with excellent net-play performance. They are very strong defensively and offensively. However, we will do our best to take the title,” added the former head coach of the China national squad.

In the Sunday’s showdown, China’s Tianjin Bridgestone challenge Toray Arrows, the champions at this year’s Japan V-Premier League. The Japanese superpowers lived up to everyone’s expectation when they powered past tall and towering Zhetyssu of Kazakhstan in straight sets 25-17 25-17 25-20 in the other semi-final clash on Saturday.

“We served well in the match against the Kazakh team. Good serves lead to success. We’ve learned from the beginning that we have to play much taller rivals. Therefore, we tried to attack their blockers effectively and efficiently and what we have focused worked out pretty well,” Kanno Koichiro, head coach of Toray Arrows, commented.

“Actually, no matter what team we will take on in the final, we will find it difficult. However, if we can make a choice, we want to play the Chinese side. Chang are too strong and playing them on their home soil is not good for us because we have to fight them and their cheering crowds alike,” the coach said earlier before the start of the Chang-Tianjin match.

On Sunday, the final day of the nine-day top-flight competition, China’s Tianjin Bridgestone and Japan’s Toray Arrows battle it out in the showdown for the eventual title. The winners will capture the prestigious Cup of HRH Princess Maha Chakri Sirindhorn as well as a berth to contest the FIVB World Women’s Club Volleyball Championship to be held in Doha, Qatar between October 13 and 19.