GP 2014: Everything ready for Group 3 Finals

After 24 matches, the four most important encounters are just ahead for Group 3 of the FIVB Volleyball World Grand Prix. Excitement is building in Samokov ahead of the Finals on Saturday and Sunday. 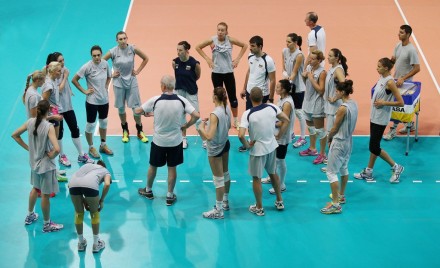 Group 3’s long run has spanned four countries, from Almaty in Kazakhstan to Mexico City, Brno and Porec, before finally making its way to Samokov, Bulgaria, where hosts Bulgaria and the other three best teams of the preliminary phase will compete for gold.

The recent head-to-head records show that the Czech Republic and Kazakhstan have already played each other this year in Pool R in Brno, where the home team prevailed 3-0.

Bulgaria won the match against Croatia 3-1 in Porec. Arena Samokov, which is not far from the famous Bulgarian skiing resort of Borovets, is the 3,000-seat venue which will open its stands for the fans of this week’s contenders. Of course, the biggest expectations are upon the host team’s shoulders.

“Personally, I’m not feeling pressure for this tournament, despite the fact that we are the organisers and were already qualified,” said Bulgaria coach Vladimir Kuzyutkin.

“I think that athletes like Yaneva, Zarkova, Filipova, Nenova have enough experience to play at this level and should not feel too emotional about playing in front of our fans.  We’re looking to this tournament as a preparation for the World Championship, but I want to be clear on this: I read some interviews of my colleagues talking about World Grand Prix  as a  sort of training for what is to come in Italy. Every tournament can be a preparation for something more important, but my thought is that we’re here to win. Maybe we won’t get the medal, I’ve calculated this also, but we’re facing opponents to go for the victory. We’re not 100% now: sometimes, however, it is good not to win every step of a preparation. We can lose some matches on our way, I can understand that.”

ECHJ W: Tampere and Tartu ready to host women’s U19

WL M: Oranjes one step away from...