One of the most heralded women’s volleyball teams in the history of the Olympics is bound to Japan where they will battle with other seven sides for the last four remaining berths in the next London Games. 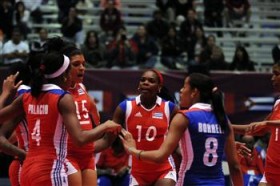 The three-time women’s Olympic champions Cuba team departed from Havana to Tokyo on Wednesday to participate in the FIVB World Women’s Olympic Qualification Tournament, the last chance to get a ticket to the 2012 London Games.

The competition represents a big challenge for the Cuba’s women team who first debuted in the Olympics in the 1972 edition and has been present in all the Summer Games with the exception of 1984 in Los Angeles when declined to participate.

In order to book a spot in the London Games, Cuba needs to finish among the top three teams of the event that doubles-up with the Asian Continental Olympic Qualifier. The next Asian team not qualified in the top-three also gets the ticket to the Olympics.

Teams of World Champions Russia, World Grand Prix bronze medalists Serbia, Cuba and World No. 17 Peru are the international sides to take part in the round-robin tournament along with the representatives of Asia, the world No. 3 hosts Japan, Thailand (No. 12), Korea (No. 13) and Chinese Taipei (No. 28) from May 19 to 27 at Tokyo Metropolitan Gymnasium.

The “Morenas del Caribe” squad claimed gold medals in the 1992, 1996 and 2000 Games held in Barcelona, Atlanta and Sydney respectively and continued with a bronze medal in Athens 2004. In the 2008 Beijing Games they finished in fourth place.

Only the former Soviet Union with four women’s Olympic volleyball titles has won more gold medals than Cuba in the history of the Summer Games.

The Cuban Team recently lost a four-set match to Dominican Republic in the finals of the NORCECA Olympic Qualifier held in Tijuana, Mexico.

Currently placed in the No. 10 position in the world rankings, Cuba has suffered the loss of several key players who retired or were dismissed and are going through a renovation process.

Cuba’s top attackers are Yoana Palacios and Wilma Salas, the top and third best spikers respectively of the NORCECA Qualifier, are both products of the junior ranks along with middle blockers Rosanna Giel and Gyselle Silva. The setters Yanelis Santos both and Yusidey Silie are the only remaining players from the team that competed in the Beijing Olympics. The libero is Emily Borrell.

Are they the oldest active players in...