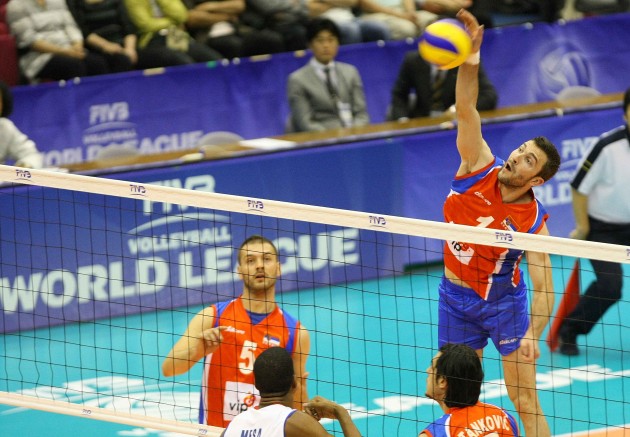 Nikola Kovacevic made his 2012 World League debut, leading Serbia to a tough win over Cuba

Five Serbian players reached double digits, with Nikola Kovacevic leading with 16 points. Milos Nikic and Sasa Starovic had 14 a piece. Leading all scorers was Cuba captain Wilfredo Leon with 20 points, followed by the powerful Hernandez who notched 19 (including four aces) in a busy day.

Serbia started well early with four straight scores, but Cuba’s Hernandez scored two consecutive aces with his jump serve, helping keeping his side close at 6–5. But strong attacking from Dragan Stankovic and Kovacevic pushed Serbia back ahead 16–11 mid-set. They carried that through with aces down the stretch from Stankovic and Nikic to help take the first set 25–19.

But the Cubans lit up in the second, with Hernandez attacking well on the wing, Rolando Cepeda Abreu and Isbel Mesa Sandobal blocking well up front and the pair posted consecutive stuffs to edge ahead 7–3. Cepeda sparked a five point run that made it 18–11 adding an ace in the process. Marko Podrascanin valiantly tried to bring his team back with two blocks but Cuba evened the match at one set all on a block by Mesa.

Orland Samuel‘s side brought momentum into the third with Hernandez still firing away on the wing to jump ahead at 10–5. But despite strong serving from Cuba, Serbia fought back with spectacular diving receptions from Nikola Rosic and Kovacevic, both of which led to Starovic scores. That run saw Serbia outscore Cuba 10 to 4, grabbing a 15–14 lead. It was a tight race from then on in until Serbia jumped ahead 24–22. Cuba bravely fought off four set points, but two Kovacevic spikes snatched the set for Serbia.

Hernandez further finesse in the fourth with a clever tip edging Cuba ahead 9–6. But the high-flying Nikic responded with four scores including a spectacular block on Yenry Bell Cisnero, and an ace that drew Serbia even at 16–16. Again it was close late on with number one for each side, Leon and Nikovic exchanging spikes up until 24–24. Cuba fought off one match point, but Serbia captain Bojan Janic came off the bench to clinch the match with a tip, taking the set 27–25, and the match three sets to one.