European champions Serbia defeated Chinese Taipei in straight-sets (25-19, 25-15, 25-16) in the opening match on the first day of action at the FIVB Women's World Olympic Qualifying Tournament in Tokyo, Japan on Saturday. 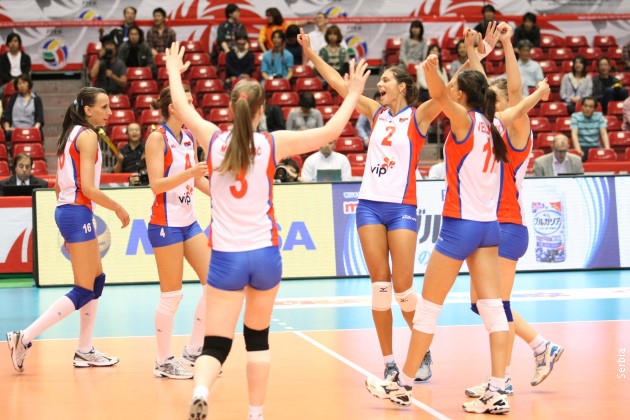 Serbia held a huge 18-3 advantage in blocks and also led 5-1 in serving aces. The winners commited 14 errors to 20 by the defeated side.

Chinese Taipei moved out to a 4-2 lead in the opening set after a pair of Serbian errors. A spike by Milena Rasic made it 4-3 and Serbia then tied it on a block by Rasic. Tsai Yin Feng‘s spike put Chinese Taipei up 6-5. Chinese Taipei displayed some good cominbation play early and led 8-6 at the first TTO. Jelena Blagojevic‘s service ace evened the score at 8-8. A nice block by Wen I Tzu took the score to 11-11. Serbia then took a 15-11 lead after a return error by Chinese Taipei. The Serbs made it 16-12 at the second TTO on a big spike by Rasic before a spike from Wang Sin Ting slowed the Serbian advance at 17-14. Maja Ognjenovic’s block gave Serbia a 19-15 margin as they moved toward taking the set. Chinese Taipei called a timeout trailing 22-16. Wen’s spike moved Chinese Taipei to within 22-17. A receiving mistake by Serbia made it 23-19, but Chinese Taipei then committed an unforced error and the Serbs took the set 25-19 on a spike by Rasic after a long rally. Rasic scored six points for Serbia in the set, while Wen led Chinese Taipei with four.

A spike by Jovana Vesovic saw Serbia begin the second with a 3-1 lead. After falling behind 5-1 on another spike by Vesovic, Chinese Taipei called a timeout. Serbia scored two more points to make it 7-1 before Wang’s spike halted the surge. The Serbs led 8-3 at the first TTO. Chinese Taipei trailed 11-5 after Wang’s crosscourt spike. Rasic then served into the net for 11-6 before a block by Wen saw the score to 13-8. Stefana Veljkovic soared for a spike to put Serbia up 15-10 and then Vesovic’s spike gave the side a 16-11 lead at the second TTO. Sanja Starovic‘s dink at the net made it 18-12 for Serbia but Tsai Yin Feng‘s block saw the Serbs pulled back to 18-14. Jovana Brakocevic made a nice dink at the net to put the Serbs up 20-15. Trailing 21-15, Chinese Taipei called a timeout. Two service aces by Brakocevic then made it 23-15 for Serbia and they quickly ended the set 25-15.

Serbia rapidly moved out to a 5-1 lead in the third set but a service error by Vesovic took the count to 6-3. A spike by Blagojevic saw Serbia enter the first TTO with an 8-4 advantage. Chinese Taipei pulled within two points at 8-6 after Serbia sent two spikes long. Brakocevic’s spike sailed long and Chinese Taipei was within a point at 9-8 and then pulled even on another spike that went long, but Serbia took the lead right back when Tsai Yin Feng made a service error. Serbia went up 13-11 on a nice block by Brakocevic before another block from the middle sent Serbia into the second TTO with a 16-11 margin. Serbia came out of the timeout inspired and took the next four points to make it 20-11. Chinese Taipei called a timeout to try and stop the slide and a spike by Wang seemed to help coming back on to court, but Serbia came right back on a blast by Brakocevic for 21-14. Veljkovic’s spike moved the count to 22-15 as Serbia closed in on the match. Vesovic drilled a spike for 23-15 and Tijana Malesevic followed with a service ace to take it to match point at 24-16. Rasic ripped one final spike to give Serbia the set 25-16 and the match.