World champions Russia took a major step towards the London Olympic Games following their triumph over Serbia in the fifth day of action of the FIVB World Women’s Olympic Qualifying Tournament at Tokyo Metropolitan Gymnasium on Friday. 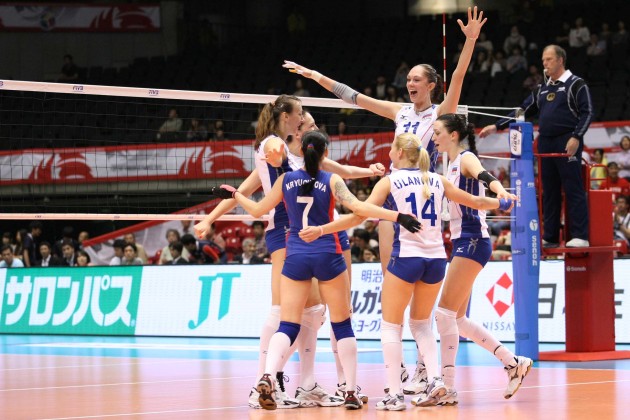 Since the event doubles as Asian Continental Olympic Qualifier, the top three teams at the end of the competition plus the best Asian team not among the medalists will get spots for the Summer Games at the British capital.

Russia expanded their unbeaten record to 5-0 with a four-set (25-18, 25-11, 14-25, 25-22) victory over Serbia who dropped to 3-2. The winners have two remaining matches against hosts Japan on Saturday and the winless Chinese Taipei on Sunday.

“We had a problem with receiving in the third set but we were able to solve the problem and get the win”, Russia’s coach Sergey Ovchinnikov said. “I am happy with the victory and hope Serbia team can win its last two matches.”

Japan improved to 4-1 win-loss record while Thailand (3-2) and Korea (3-2) also came out winners on Friday.

“We won in five sets”, Japan’s coach Masayoshi Manabe said during the press conference after the match “Saori Sakoda, Kanako Hirai and Risa Shinnabe saved us.”

“I am happy with the victory but not satisfied with the way our team played”, Thai coach Kiattipong Radchatagriengkai said. “We can improve on our technique for the next match.”

“It seemed that our opponent was every nervous today”, Korea’s coach Kim Hyung-Sil said. “This allowed us to play with a free manner in the match. With confidence we will keep going on.”