Serbia defeated Japan in straight sets (25-19, 25-23, 25-16) on the first day of action in the FIVB Men's World Olympic Qualifying Tournament at Tokyo Metropolitan Gym on Friday. 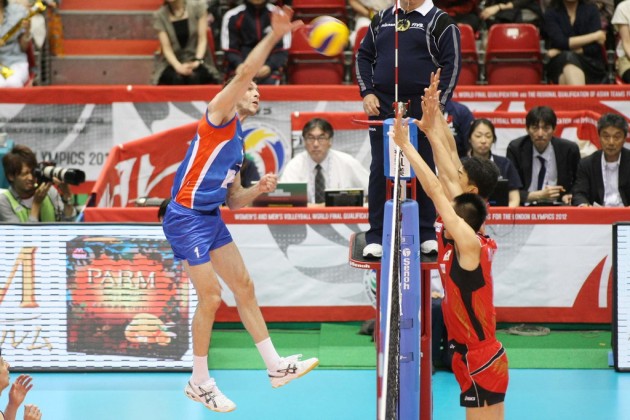 Serbia, ranked seventh in the world, imposed their will on Japan from the outset. The host nation had trouble defending against the strong Serbian attack and also made several unforced errors in the loss.

Japan put up a bit of a fight in the second set, but could just not contain the relentless Serbian attack.

Milos Nikic tallied a match-high 13 points. Nikola Kovacevic chipped in with 10 in the triumph.

Yamamoto‘s spike put Japan in front 5-4 in the first set. Serbia moved in front 7-6 on a spike by Nikola Kovacevic. Serbia fired a spike long and Japan led 8-7 at the first TTO.
Takaaki Tomimatsu sent a serve long to put Serbia up 10-9. With Serbia leading 13-10, Japan called a timeout. Yusuke Ishijima sent a serve long to make it 15-11 for Serbia. The Serbs were up 16-11 at the second TTO. Japan made it 18-14 with a fine spike off an option play by Yuta Yoneyama. Marko Podrascanin took it to 20-15 with a spike. A block by Milos Nikic moved Serbia within two points of the set at 23-18. Serbia claimed the set 25-19 when Kunihiro Shimizu sent a return wide. Milos and Sasa Starovic had four points each in the set.

Yamamoto‘s spike gave Japan a 5-3 lead in the second set. Serbia leveled at 7-7 on a block. Japan led 8-7 at the first TTO after a service error by Serbia. Kovacevic sent a spike long to give Japan an 11-9 advantage. A nice save by libero Takeshi Nagano resulted in a point for Japan on a spike and a 13-10 lead. A spike by Tomimatsu made it 15-13 for Japan was on top 16-14 at the second TTO. A block by Podrascanin equalized it at 18-18. Serbia then took an 19-18 lead on a spike. Yamamoto‘s spike tied it at 22-22. Serbia retook the lead when Yoneyama put a serve into the net. A dink by Kovacevic gave the Serbs set point at 24-22 and Japan took a timeout. Podrascanin closed the set 25-23 with a powerful blast.

Milos Nikic pounded a spike as Serbia moved out to a 5-3 lead in the third set. Yoneyama fired a serve long and Serbia led 8-6 at the first TTO. A service ace by Kovacevic put Serbia up 13-9 as they gained momentum. Yoshihiko Matsumoto sailed a serve long and Serbia took a 16-11 lead into the second TTO. Down by seven at 18-11, Japan called a timeout to try and stop the surge. A spike took it to 20-12 as Serbia eyed the match. Nikic crushed another spike and Serbia was two points from victory at 23-15. Podrascanin‘s spike took it to match point at 24-16 and Serbia closed it out 25-16 when he spiked once more.

Japan will play Venezuela on Saturday, while Serbia battles Korea.