EL M: Austria and the Netherlands score easy wins in opening day of round 2

The Netherlands scored this afternoon a first win in the second round of action for Pool B of the 2012 CEV Volleyball European League – Men by downing Romania in straight sets (25-18, 25-18, and 25-23). 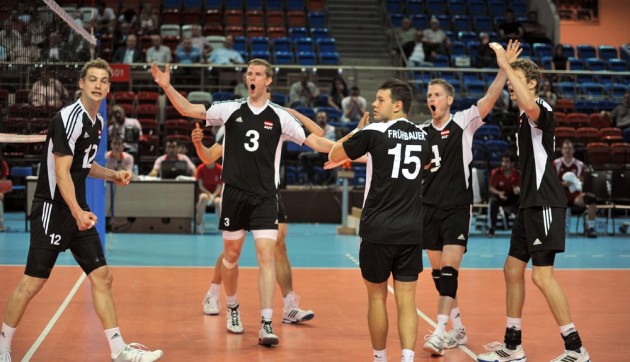 The “Oranjes” started very well and controlled the opening set all the way through, setting the pace of the game by both mandatory stops (8:6, 16:11). A similar story unfolded in set 2 (8:5, 16:8) with the Dutch guys following up on their previous performance with another 25-18. Romania briefly went to the front in set 3 but still the Netherlands could flip the score around finishing it off in three sets (25-23) to score their third win since the start of their campaign in the European League. Opposite Tony Krolis topped the charts of the best scorers with 23 points, 8 more than middle blocker Wytze Kooistra.

Later in the afternoon Turkey lost to Austria 1:3 as the guys from Vienna were debuting in this year’s European League after resting last weekend as the competition got started in Romania. Austria gradually got control of the operations in the opening set going for the final 25-22 but the hosts of Turkey stormed back in set 2 setting the pace all the way through there (8:6, 16:12, 25-21). Austria re-asserted its supremacy in the third set (25-16) and played strong also in set 4 so that the game turned into a relatively easy 3:1 win for the group mentored by Michael Warm. Thomas Zass totaled an impressive haul of 29 points well supported by Alexander Berger who added 18 to the Austrian count.