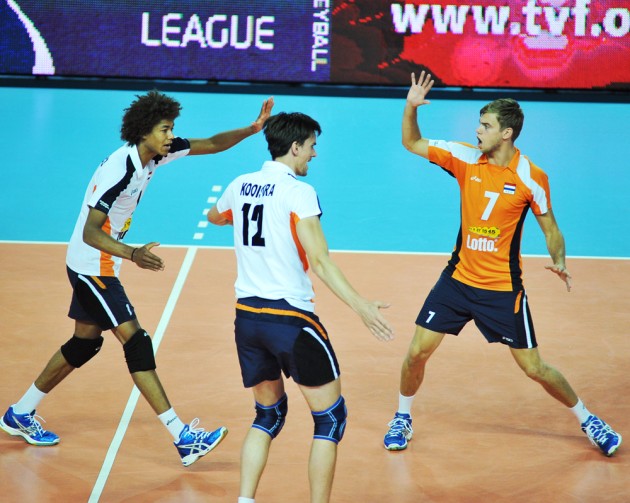 After going up 2:1, the “Oranjes” suffered the return of the Austrians who changed gear after the second technical time-out of set 4 thereby calling for the tie-break. However, the Netherlands were able to regroup there opening with an 8:4 lead that they eventually maintained up to the final 15-12. Austria’s Thomas Zass amassed a terrific haul of 35 points in the match, including 6 aces. “We are happy with taking one point from this match but we had our ups and downs, especially in the fifth set” commented Austria’s head coach Michael Warm.

“I think we shall have claimed this match with the score of 3:0 or 3:1. We definitely did not play that well this afternoon and we will try to fix our problems for tomorrow as we play the hosts of Turkey” stated Dutch head coach Edwin Benne. Questioned about the progresses of Volleyball in Turkey, Benne – who played for Eczacibasi – said: “There are some positive signals but I think it will take some years to make it to the top. I only regret that Eczacibasi has dissolved their men’s team”.

Later in the afternoon Turkey scored its first win in this year’s European League by downing Romania in straight sets (28-26, 25-17, and 25-20). Turkey controlled the game with ease and could celebrate a well deserved win in three sets as Emre Batur and Serhat Coskun top scored with 21 points apiece. “In Romania we had edged Turkey but this time things went differently here in Istanbul” commented head coach Dan Gavril. “They have changed their libero but anyway the breaking point was the final section of the first set. If we had won that set, things could have turned in a totally different way for us” he added.  “This is a very important win for us. I see these matches as a good preparation for the next legs, yesterday we made a lot of silly errors but this time we played much better” stressed Turkey’s head coach Veljko Basic.

IRI M: Finalists will be decided in...