Serbia proved an impossible nut to crack for Argentina on Sunday as the European champions overcame the South Americans 3-0 (25-16, 25-22, 26-24) in an FIVB World Grand Prix match at Keelawes 1 Gymnasium. 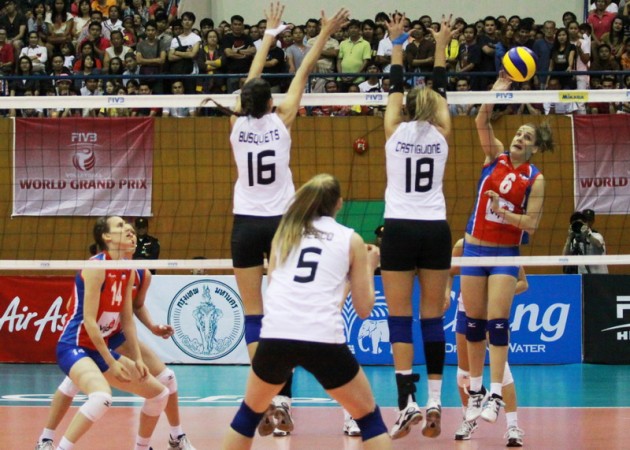 Serbia’s Ana Bjelica was the top scorer in the match with 15 points, while Lucia Fresco led Argentina with 12.

With both sides well down the standings after eight matches, Serbia played Argentina without any hope of advancing to the Finals in China.

Serbia, who beat Argentina 3-1 last weekend in Belgrade, started confidently to take an initial 7-3 lead. Bjelica and Jovana Vesovic combined well to uncork a series of spectacular spikes to stretch Serbia’s lead to 13-9. Argentina kept up their pressure and played more consistently, with the 193-cm Fresco, the team’s tallest player, attacking devastatingly at the net. Argentina’s courage and determination were rewarded when they narrowed the gap, but Bjelica penetrated the Argentinean defence with her sharp cross-court spikes, moving Serbia ahead 24-16. When a serve from Emilce Sosa went wide, Serbia found themselves 1-0 up.

It was a different script in the second set when Argentina got off to a flying start. Excellent blocking and hard attacks put Argentina in front 5-2 and they used their good teamwork to add three more points to lead 8-2. However, Serbia gradually clawed their way back and caught up with the world No. 18 at 16-16. Serbia continued to attack, with Nadja Ninkovic tearing Argentina’s defence apart with her explosive cross-court attacks. At 24-21, Lucia Fresco saved a setpoint for Argentina before Vesovic fired a winner to end the set at 25-22.

The third set was even closer. Bjelica and Vesovic combined well for Serbia, with Bjelica attacking mightily from mid-court to help her team into a 12-8 lead. Paula Yamila Nizetich dazzled with her powerful jump serves to help Argentina close the gap from 16-21 to 23-23. In a do-or-die battle, a Fresco serve went wide, handing Serbia matchpoint at 24-23. But Bjelica served out to give Argentina another chance. However, she made amends by producing a mid-court attack that Argentina couldn’t handle that gave Serbia their second matchpoint. Serbia attacked with another sharp shot from Tijana Malesevic and that clinched the match.