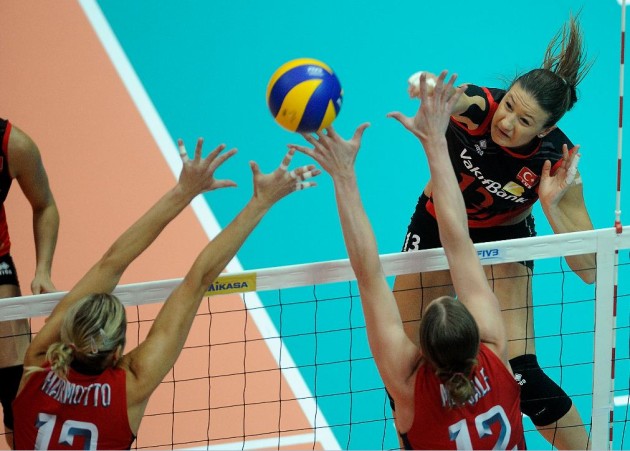 Neriman Ozsoy hit the Mikasa ball and she eventually finished with 20 points in their 3-1 loss to the USA.

The Americans made real trouble for the Turkey team defense from the start of the match with their blitz attack and jumped to a 5-0 lead to force Turkey coach Marco Aurelio Motta call an early timeout.

Turkey tried to cut the deficit to only one points with a block from Eda Erdem and several mistakes from the United States. But the Americans soon answered with a 4-0 burst, capped by an ace serve of Kristin Richards, and led the game at 16-10.

Nancy Metcalf gave the US team set point 24-18 with a kill. Then she, combined with Christa Harmotto and Megan Hodge, had three blocks together in a row and turned the last one into the wining point for USA.

USA took controlled in the second set early and led into the first TTO at 8-5. The American managed to hold the lead to 18-12 on back of solid defense and the continuous firing power from Hodge, who had already scored 41 points in the previous two matches of USA in the finals.

Trailing at 17-23, Turkey launched a 4-0 comeback to pull it at 21-23, but a serving mistake of Neriman Ozsoy awarded the Americans set point before Hodge converted on it with a precise shot against two-people blocking of Turkey.

It was hotly contested early in the third set with both teams playing efficient attacks. However, Turkey suddenly found the steam toward the end of the set. After a block from Nilay Ozdemir, Turkey established a 23-19 lead and Darnel gave Turkey the set point with a drop at the middle of the net.

USA saved one set point but a out-of-court serving of Alisha Glass awarded the set to Turkey with 25-21.

The two sides fought even harder and their gap never exceeded two points before the more energetic Turkey took the lead at 11-7, but the Americans soon answered with a 4-0 run to tie the game again at 11-11.

The game turned into a see-saw battlefield as two teams tied from 11-all to 16-all before Cynthia Barboza‘s shot from left sparkled the US team to a 4-0 run to rebuild the winning momentum.

USA ran to the final victory as they scored five of the last seven point and a cunning shot of Hodge sealed the match for USA at 25-19.

How many times does it take to...