World champions USA will renew their rivalry with China after the two teams were drawn in the same first round pool for this year’s FIVB Volleyball Women’s World Cup. 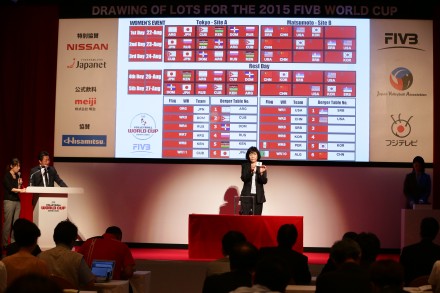 Karch Kiraly’s team defeated China 3-1 in the final of the 2014 FIVB Volleyball Women’s World Championship and at the last World Cup in 2011, USA finished in second place behind Italy, while China were third.

The World Cup takes place across Japan from August 22 – September 6 and features 12 sides including hosts, world and continental champions.

USA and China have been paired in Pool B which takes place in Matsumoto, Okayama and Komaki, along with South Korea, Serbia, Peru and Algeria.

Host nation Japan lead the way in Pool A, along with Dominican Republic, Russia, Argentina, Kenya and Cuba.

The hosts will be out to match their performances at the 2014 FIVB Volleyball World Grand Prix where they claimed silver and the London 2012 Olympic Games, where they won bronze.

There are 30 matches in the first round which takes place over five days and teams are divided into two pools of six teams. In the second and third rounds teams play the other teams they had not previously played, over six days and 36 matches. At the end of the competition the medals go to the top three teams, with the top two earning a place at the Rio de Janeiro 2016 Olympic Games.

See the draw of Pools here.