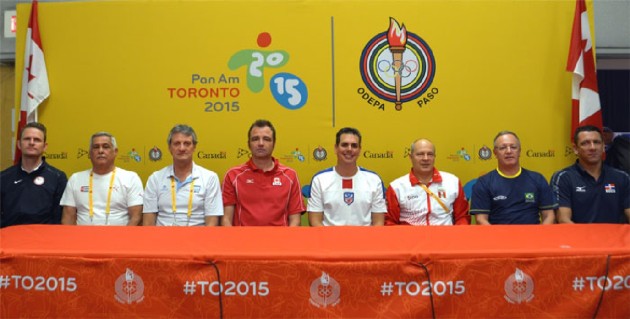 Ze Roberto, as the highly touted coach is mostly known, admitted his team needs to play at a very high level while saying that Dominican Republic and USA both have teams capable to win the title.

“I rather prefer to wait and see instead of making any predictions about our chances,” the Brazilian coach said. “Dominican Republic and United States both have strong teams and also can reach the finals.”

The coaches of the eight participating teams gave their views about their sides and goals during the preliminary inquiry conducted on early Thursday, one day before the start of the Pan Am Games volleyball tournament. Here follows the excerpts of their statements:

Guillermo Orduna, Argentina: “Argentina don’t participate in the Pan American volleyball since 1999, so being back is very important. Our team has grown and improved after the Grand Prix. We had very good matches in Croatia against very tough teams and we had a good game against the Netherlands in Argentina. We need to recover physically after two very demanding months.”

Ze Roberto, Brazil: “I think the level this time is stronger and we need to play very well to reach the finals. I hope we can play for the gold medal but I rather prefer to wait and see instead of making any predictions about our chances. Dominican Republic and United States both have strong teams and also can reach the finals.”

Arnd Ludwig, Canada: “We stabilized our game during the Grand Prix and we are looking forward to play that way in the Pan American Games at home. Our goal is to make the semifinals. Playing good matches against strong competition in the Grand Prix gave us a boost in our confidence and I hope we can bring here that same energy to our games.”

Roberto Garcia , Cuba: “The team is coming with a good preparation after the Pan American Cup and the Grand Prix. This is very strong competition and our pool is a difficult one with Argentina, Dominican Republic and Canada. The team has grown a lot and I am looking forward to have good dividends in our pool.”

Marcos Kwiek, Dominican Republic: “This is a very important competition for us. Our team has improved since the Pan American Cup with the veteran players now adjusted to the group. I hope we can continue improving with the competition. Our intention is to win a medal. The pool is a tough one and we have to take one game at a time.”

Mauro Marasciulo, Peru: “We are coming here after several consecutive competitions and satisfied with our participation at the FIVB World Grand Prix and reaching the finals of our Group. We are in a strong pool with the Olympic and the World champions so it will be tough but also of benefit for our young players who will be representing Peru in the next Pan American Games in Lima.”

Jose Mieles, Puerto Rico: “Our team is in a very good moment after a series of tournaments during the summer in preparation for this event. We are trying to make history winning our first medal for Puerto Rican volleyball at the Pan Am Games. The addition of Karina Ocasio and the consistency of Stephanie Enright give us more stability.”

Daniel Fisher, USA: “We feel have a strong team and we are coming in here with the intention to win the tournament, and I feel we have the players to do it. I think we have a lot of confidence in the girls and we have a lot of experienced players. Our confidence has increased after we won the Pan Am Cup. We are very excited for our first day of competition”.

Feva Board of Administration meet for the...