GP: Netherlands will play in Group 1!!!

Netherlands express is going to the Grand Prix Group 1! Girls led by Giovanni Guidetti outplayed Poland in the Group 2 finals and qualified for the top rank! 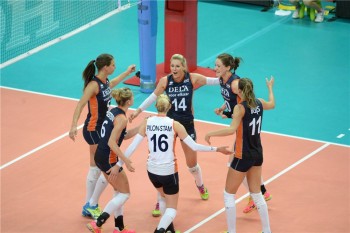 Recall that the Orange squad finished the first phase with all 6 wins, while then they celebrated both in the semifinal and in the final without losing a single set! Amazing!

Despite having the crowd against them in the final, Netherlands were simply too good for Poland. Lonneke Sloetjes was once again fantastic in attack. She scored 19 points, while Anne Buijs added 16. Katarzyina Zarolisnka tried to answer on the other side but her 12 points were not enough for Poland.

Therefore, Netherlands won the Group 2 and from the next year they will play in Group 1, among the best teams from the world.