The national team of Belgium scored an easy win against Hungary at the start of competition in Pool B on the 2015 CEV European Championship 3-0 (25-15, 25-8, 25-18). The toughest resistance from the European League winner was expected, but the „Red Dragons“ were on fire. 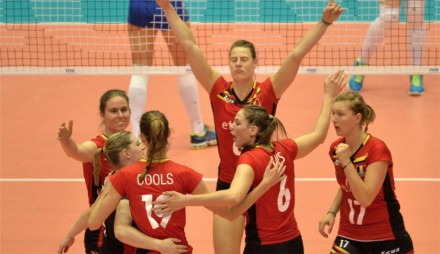 Belgium was tremendously superior in the first set, smashing opponent since the opening point 3-0. Hungary created same run to equalize 3-3, but Belgians again went ahead with 6-1 run (9-4)! Hungary couldn’t recover from that strike and point by point, Belgium increased advantage until the end of the set 14-8, 20-12, 25-15.

Similar story happened in the next set. At 2-all, Belgium blew off rival with 5-0 run (8-2) and practically finished entire job in Set 2. At the second TTO, Belgians had unreachable ten-point lead 16-6. It has grown to final and for Hungarians, embarrassing 25-8.

Hungary needed at least one set played decently to justify its presence at the championship. It was Set 3, but only partially. Hungary had one-point initiative until 10-all. Then, Belgium started with its play from previous two sets and made 7-1 run (17-11). The hopes of Hungarians were extinguished 25-18.

Lise van Hecke was a leader in points in Belgium with 15, while European League MVP, Renáta Sándor, had eight in Hungary.