With the amazing support in Rotterdam’s hall, the Netherlands marched into the semifinals of the 2015 CEV European Championship with a stunning win in four sets against giants Poland 3-1 (25-16, 23-25, 25-16, 25-15)! Lonneke Slöetjes scored game-high 23 points. On the losing side, Katarzyna Ewa Skowrońska-Dolata had 22. 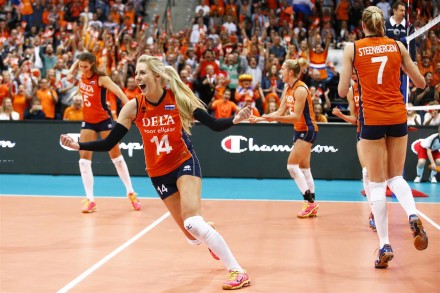 In Set 1, Poland found out what does it feel like to play against strong team and frantic crowd at the same time. Despite trailing 6-4, the Netherlands quickly leveled 7-7 and went ahead 12-9. In the next several points, Polish women tried to reach the gap and their last attampt was at 16-14. Afterwards, the Dutch typhoon blew Poland away! Dutch players had 7-0 run for 23-14. They didn’t have problems to take this set to an end 25-16.

Poland fought much harder in the second set, not allowing the Netherlands to make a substantial gap. It was 16-14 for the hosts and later 20-17. Polish team showed that it can play in series as well, making monster 6-1 run and took lead 23-21. Dutch players equalized 23-23. It was the challenge that decided the winner of this set, 25-23 for Poland.

Third set was a one-way street. The Netherlands established full control from the start, slowly increasing their lead. The movement of the result went from 7-4, 10-4 over 21-13 to the final 25-16.

The Netherlands played the fourth set on the wings of a previous one. Things looked promising for the Polish ladies as they kept up with the hosts until 10-all. But then, another HUGE run from the Dutch team – 8-0! There was no return for Poland 25-15.

ECH W: Akbas – “We had a lot of troubles to beat Germany”, “It’s a bit frustrating” said Pedulla