Will Russia continue their domination in women’s volleyball? Can Serbia repeat the success from 2011? Can Netherlands win the gold exactly 20 years after the last one? Will Turkey write a new chapter in their history? Only one of these four questions will have YES as an answer… 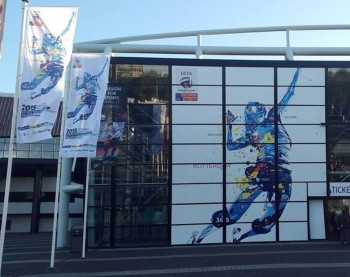 The semifinals. One step from securing a medal, two from reaching the ultimate prize. These four teams will try to make history.

Russia: To start with the reigning European champion. Did you know that Russia have 18 gold medals at EuroVolleys, while all other nations only 10 altogether!!! The women’s national team of Russia made quite a domination on the Old Continent, but they want more. And everyone in Rotterdam says that Marichev’s girls are once again considered to be the top favorite for the gold.

PLAYERS TO WATCH: Tatiana Kosheleva and Natalia Obmochaeva are definitely the main weapons of Russia. If they play as they know, other teams will be in real problem.

Serbia: The European champion from 2011 Serbian team is flying high after they secured an Olympic ticket at the last FIVB World Cup, while they continued with excellent performance here at EuroVolley. They will have a tough job in the semis, as they will face Russia, but do not forget that girls led by Zoran Terzić defeated Zbornaya recently in Japan!

PLAYERS TO WATCH: Maja Ognjenović is the brain of this team. Her sets look like impossible to predict, and that make life of outside hitters a lot easier. Speaking about them, Brankica Mihajlović might make difference in the final stage of EuroVolley. She brings a lot of energy to the court and that might be so valuable for Serbia. And do not ever forget Tijana Bošković, a young volleyball star who is already one of the best opposites in the world.

The Netherlands: Giovanni Guidetti does not take any jobs in volleyball. He starts a project only if he truly believes that he can make something really big out of it. And, he saw a huge potential in Netherlands. This country Everyone in Rotterdam hopes that this generation might repeat that succes from 1995 when the Dutch team won the only gold medal in their history. Do we need to mention that, back then, the EuroVolley was also played in the Netherlands?

PLAYERS TO WATCH: It will be a huge surprise if Lonneke Sloetjes does not win the award for the top scorer of the tournament. So far she has collected 90 points, one less than Skowronska-Dolata, but the Polish star is no longer in the competition. All the others are far behind… At the same time, Anne Buijs is also having a great tournament, so two of them should lead Netherlands during the upcoming weekend.

Turkey: The only country from these four that has never won the EuroVolley. Turkey have one silver and one bronze, but some would say that they now have the strongest team looking the last 10 years. On their way to glory, Turkish girls will firstly have to eliminate the Netherlands, co-hosts of the tournament. It will definitely not be easy, but if you want to be great, than you need to beat the best.

PLAYERS TO WATCH: Turkey is a well balanced team and every time someone else might step up and decide the game. Neriman Ozsoy has had several fantastic performances so far, while there are also Gozde Kirdar, Polen Uslupehlivan and of course amazing setter Naz Aydemir.

ECH W: Terzić – “Russia want revenge, but we are ready for another clash”