The players shared their feelings after the match. 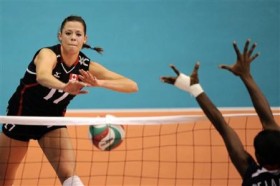 “Costa Rica played a full game and with an impressive defense and both teams had their momentum,” Canada’s captain Brittney Page said. “We felt a sense of urgency and some desperation, because we felt scared to lose in the fourth set, but capitalized point by point in the end.”

“We fought hard enough in this match and you could see it on the court,” Verania Willis said. “We haven’t played like this before against Canada. We had some errors when closing, but I am glad with the way we played.”

For Canada’s coach Arnd Ludwig the result was good but not the way the team played. “The result was a good thing but I am not happy the way we played. We committed 40 unforced errors,” he stated.

“Our teams has increased the level and improved a lot since the Olympic Qualifier rounds,” Coach Xavier Perales said about Costa Rica. “We feel sad for losing but the balance has been excellent in this tournament”.