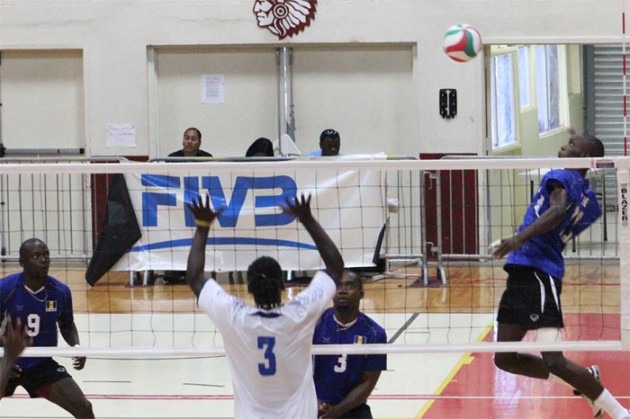 Going into the match Martinique had a 1-1 record and needed a win to be certain of advancing to the quarterfinals for the least. Barbados, on the other hand, was 0-2, its worst start ever at the competition and also needed a win to avoid certain elimination.

In the end, the Barbadians, who held an 11-8 edge on blocks brought their “A” game and led by Simpson‘s 17 points, Cox with 15 and Gill‘s nine came away with the all-important victory to end with a 1-2 record from its three matches, the same as Martinique.

For Martinique, Yoann Breleur had a match-high 20 points, captain Rodolphe Maignan got 12, and Gregory Alpha and Christophe Vitella, chipped in with ten points each.

“We are improving in each match we play and today our entire team showed up and did what was required of them”, he said. “We knew we had to win by 3-0 or 3-1 to be certain of qualifying for the quarterfinals and our setting, blocking and passing was on par today, and we now look forward to the next phase of the competition.”

In another match of Wednesday, Captain Nolan Tash led from the front with 25 points as defending champions T&T booked the first semifinal spot after beating Jamaica in five-sets on Wednesday night.

T&T, which played well below its potential won 25-17, 20-25, 25-19, 17-25, 15-13 in one hour, 48 minutes to end with 11 points at the top of the four-team Pool A table. Despite the loss, Jamaica which ended with a 1-2 record, the same as ten-time winners Barbados and Martinique still qualified for the quarterfinals as the third place finisher in the group.

This after Barbados ended with seven points in second spot due to sets won while Jamaica (.993) had a better points-ratio than Martinique (.913) after both teams ended with six points.

In addition to Tash, who also had two blocks and three aces, European-based Marc-Anthony Honore added 13 (four blocks) and Simon Blake ten while Sean Morrison chipped in with nine for the winners who ended with a 3-0 record and will have Thursday off as they await the semifinals on Friday.

“We know our capabilities and know that we are a better team. We got a great test tonight and credit to team T&T we had a solid team effort and responded well to everything that Jamaica threw at us“, Tash said.

Having won its first match over Guadeloupe, the Bahamians were keen to pick up another win behind another solid all-round display of good serving, setting and blocking.

Once again Bahamian Captain Prince’tanique Wilson led from the front with 19 points for his team while Byron Ferguson added 16 and Renaldo Knowles, 12 in the win which came in one hour, 43 minutes. For USVI, its captain Alvaro Delugo was their top scorer for the second straight match with 16 points, the lone player in double-figures.