Brazilian (three) and US volleyball (one) gained their representatives at the legendary Hall of Fame in the city of Holyoke, Massachusetts, United States. 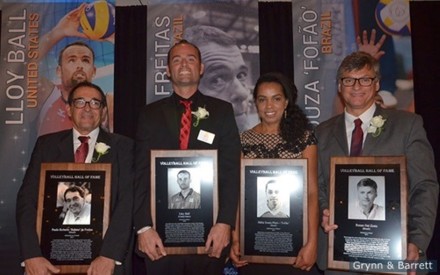 The foursome, elected via voting of current Volleyball Hall of Fame members, entered as the 30th class. Now, the institution has 125 members from 21 different countries in total.

Ball is the only US male indoor player to play at four Olympics (1996, 2000, 2004 and 2008) and won gold medal at his last appearance at the tournament. He was selected The Most Valuable Player and Best Setter of the 2008 FIVB World League where USA also took gold.

Lloy Ball was inducted into the International Volleyball Hall of Fame Saturday and presented an emotional acceptance speech filled with blessings throughout his life. Watch the video for a journey through his life to reach the Hall of Fame. Induction Recap | http://bit.ly/1024VBHall

Fofao did not play the 2010 World Championship, she retired from the NT after the OG in 2008

You are right, we corrected it. Thank you!