In the ninth week of the Iran’s Super League five matches were played while one was canceled. 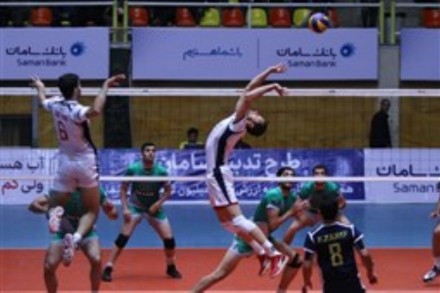 Coach of Kalleh , Behrooz Ataei Nouri said: “We had a tough game. We started well but in continuation players made some mistakes. Our players were not effective as the opponent team. We could take the game to fifth set but…”

Saipa Alborz defeated Al-Mahdi  3-2 (21-25, 26-28, 30-28, 25-20, 15-9) and scored their 5th victory to stayed at 8th place. On the other side Al-Mahdi only achieved one point and stayed at 11th. During the match two players from both teams got yellow cards, Mojtaba Shaban of Saipa Alborz in the second set even got a red card while in the fourth set his teammate Rasoul Najafi also got red card.

Match between Matin Varamin and Shahrdari Zahedan didn’t play because the guest team could not come to the game and Matin  become the winner of the match.

Note that Mizan Khorasan is replaced with Samen Al-hojaj in this season. Both are representative teams of Khorasan. So, instead of mizan khorasan, write down Samen Al-hojaj