As he stands at 216 cm, former NBA star Vlade Divac is somebody you still can easily pick out also among the 15,000 fans in attendance at Earls Court for the volleyball tournament of the 2012 London Olympics. 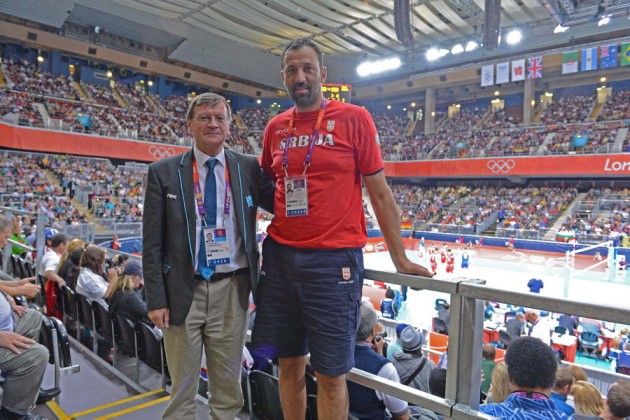 Actually Divac was among many other celebs in the stands of the Olympic family, together with another living legend, the captain of Germany’s soccer team that won the World Cup back in 1990, Lothar Matthäus. Divac looked pretty relaxed as Serbia was leading 2-0 in its third match of the tournament, but he eventually had to accept a defeat for the group captained by Bojan Janic.

Divac is not simply a former elite basketball player, but also the current chairman of the Serbian Olympic Committee. “Since I have taken up this position back in 2009 and as a former player, my main goal is to be very close to every single Serbian athlete and turn the NOC into a sort of service agency that stands out for being fully supportive of our athletes’ needs. I think this is the mission that I have been trying to accomplish for the past 3 years”.

Serbia has already won an Olympic medal, right on the first day of action as Andrija Zlatic finished third in the men’s air rifle pistol event. “That was a good start for us” says Divac, who spent quite many years in the US playing for the Los Angeles Lakers, the Charlotte Hornets, and the Sacramento Kings before finishing his career wearing once again the legendary jersey of the “Lakers”. “We expect to travel back home from these Games with 5 to 10 medals and this would be an outstanding result for a relatively small country like Serbia. As for the volleyball tournament, well, with this defeat to Germany things are getting a little complicated for us but we’ll wait for the next matches and see what happens”.

Vlade Divac is a double silver medalist at the Olympics – in 1988 and 1996 – with the former Yugoslav national team and has fond memories of the days he used to spend in the Olympic village. “That was really cool, I mean, you have the opportunity to meet athletes from every single country in the world, this is really special and something you won’t find anywhere else. As for the sport, well, the nicest memory is linked to the 1996 final at the Olympics in Atlanta where we played the Dream Team and eventually settled for silver. It was a defeat, but still a moment I will never forget for the rest of my life”.