Paykan and Bank Sarmayeh have scored the wins in the first matches of the Iranian championship playoff semifinals. 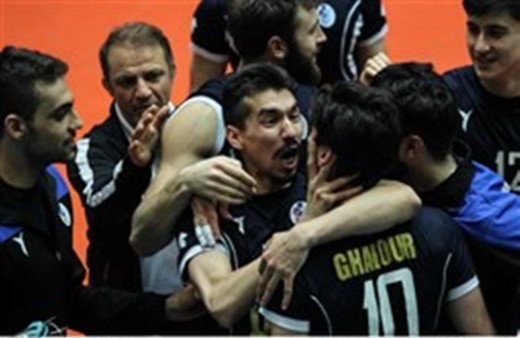 In the second set the head coach of Paykan Peyman Akbari made two substitutions, Adel Gholami and Javad Maanavi Nejad took place at the court. In this set Paykan showed better performance. Players of Shahrdari Urmia made some serve mistakes. The last service of Arash Keshavari went out of the ground and gave the last point to Paykan. Valerio Vermiglio, setter of Paykan, received a yellow card from the referee because of arguing with them…

Defense of Paykan in third set improved much more than in the previous sets, while Urmia’s players were getting nervous…

Teams started the fourth set more attentively; none of them was ready to lose a point. But someone had to lose – It was Shahrdari Urmia.

In middle of the fourth set, the net was broken and game was interrupted for a few minutes. Ebadipour of Shahrdari Urmia had 17 points while Maanavi Nejad of Pecan had 18 points…

In the other semifinal, Sarmayeh Bank beat Samen Al Hojaj in four sets 3-1(25-21,28-30,25-23,27-25). One situation marked the match. During the second set, Sarmayeh Bank’s player Seyed Mousavi and a player of away side Edirs Daneshfar had a verbal quarrel and sent some dirty words to each other. The referee decided to show red card and to sent off them from the game.

Juan Cichello assistant coach of the senior national team was watching the games and had under control performance of each player.