WoV Dream Team: It’s time to choose the best opposite! 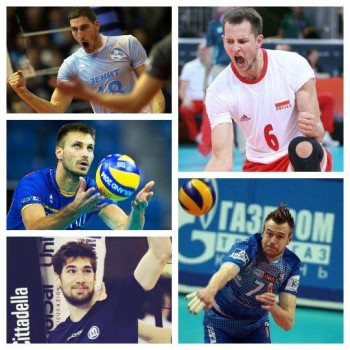 Five world-class opposites. Still, there is a place for only one of them in the WoV Dream team 2016. And it is up to you to decide which one will enter the ideal team of the season.

Maxim Mikhailov. A silent hero of Zenit Kazan. It is enough to write that he has won everything with the Russian powerhouse in this season. But it is also important to mention that he was the best when his team needed him the most. Mikhailov is simply born to play big games.

Bartosz Kurek. The top scorer of PlusLiga! He decided to return to Poland for one season and he dominated most of the games in the domestic championship. The only thing he lacked in the previous year is – trophies. His Asseco Resovia finished at the 2nd place in the Polish Championship and at the 4th place in the CEV Champions League.

Luca Vettori. He is part of the Modena crew that managed to bring back the championship trophy to the Yellow city after 14 years! On top of that, the Italian opposite was one of the key players of Modena in the Playoffs.

Antonin Rouzier. His club season was not that brilliant, as Arkasspor stayed without trophies in the 2015/16 campaign, but Rouzier’s national team season was spectacular. France won both the World League and the European Championship, while it was Rouzier who was named the MVP at that second tournament.

Ivan Zaytsev. Probably the most wanted man in the current transfer market. Zaytsev helped Italy to win the Olympic ticket back in the World Cup 2015, while then he had a pretty good season with Dinamo Moscow. Unfortunately for him and his crew, Zenit Kazan was simply too good opponent in Russia, so Dinamo Moscow stayed without domestic trophies.

So, who is your favorite opposite?

Zaytsev wasn’t even the best opposite in Dinamo. Just sayin……