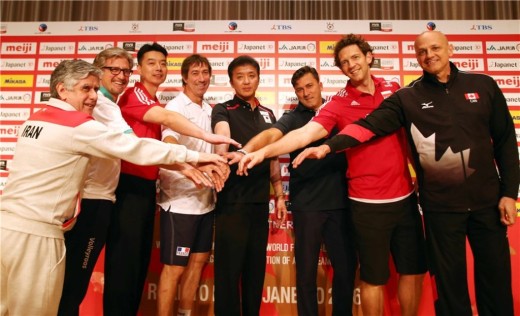 Tomorrow, eight teams will fight for four tickets that lead to the Olympic games in Rio de Janeiro. Two European teams, Poland as the world champions and France, as the European champions, are the absolute favorites for taking two out of four tickets.

Iran come right behind them while other teams have equal chances for getting the tickets.

The Asian Olympic qualification tournament will combine with World Qualifiers. It means that one ticket is reserved for one of four teams that represent Asian volleyball federation. It also means that top ranked team at this tournament will receive the ticket. These are the teams – Iran, Japan, China and Australia.

The national volleyball teams of Iran and Australia will enter the court first. Afterwards, European champions France and Asian national team will meet each other. Poland vs. Canada match is derby of the day, while the host Japan and Venezuela are going to enter the court in the last game of the day.

“I see this competition as very important. It’s a great honour to compete here and have the chance to qualify for the Olympic Games. Our condition is good. It has been a long season but we had a good camp and we are confident. As for our opponents, Poland is a world champion and is the toughest team in this competition, but the other teams are equally tough,” Tillie says.

“It is important to keep a good level for all seven matches as there is no semifinal or final. France is certainly a favourite but we have respect for all our opponents and we expect them to compete well to qualify for the Olympics,” says Antiga.

“We are here to give our best performance. We expect to qualify for the Olympics. France and Poland are the strongest teams here. One is a World League champion and the other is a world champion,” says coach of Iran Raul Lozano.

KOR W: What do you have against...