Lausanne, Switzerland, January 1, 2012 – USA Volleyball’s Destinee Hooker has been honoured for the third time as Sportswoman of the Year in her home town, San Antonio. 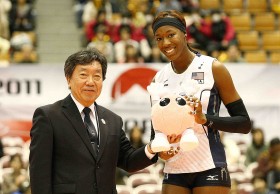 She is the first athlete – male or female – to have won the Express-News award three times.

“That’s a huge honor to have won it three times,” Hooker, 24, told the Texas-based paper.

Hooker played a huge part in earning USA an Olympic berth when they finished second in the FIVB World Cup in Japan in November. She scored 39 points in the Americans’ win over China and followed that up the next day with 24 against eventual champions Italy. It was the Italians’ only loss in the tournament. China won the bronze medal in the World Cup.

USA coach Hugh McCutcheon said he was not surprised at his star attacker’s success.

“Once you get to know her and you understand her drive and competitive nature, it’s not surprising,” he was quoted as saying. “Athletically, she’s a very special talent.”

Of her World Cup performance, he stated: “[Destinee] just competed like crazy and just kept fighting and scrapping. Like everyone else, she was trying to punch that ticket to London.”