Hong Kong tasted their first win by defeating Macao in straight sets at the Asian Eastern Zone Women’s Volleyball Championship here on Tuesday while China and Japan are the only two teams remained unbeaten as the Championship went into the third day of action. 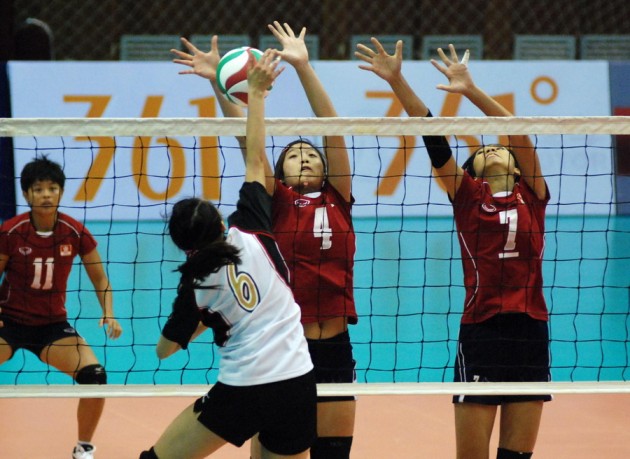 Mongolia scored the opening point of the second set, their first and only lead of the match, but their rivals tied the score immediately at one, and then Mongolia never regained the lead. Devastating left-hander spiker Ayumi Nakamura thrilled the fans with her high-flying spikes, and helped the Japanese to finish the second set with the same score as the first one.

Mongolia’s hope and confidence was quickly lost as they fell behind from the beginning of the third set,2-8 and 5-16 in the second TTO. Japan kept the lead for the rest of the final set. Mai Okumura who experienced Universide in 2011 finished the set and the match with a powerful attacking.

Hong Kong overwhelm Macao 3-0 (25-19, 25-11 and 25-11) in the second match of the day. The first set was a hard-fought battle, with both teams desperately seeking their first match win. However, many of the action was unfortunately faults, with both squads committing errors in serving, receiving and attacking.

Macao reached the first advantage with an 8-7 score. Both sides fought evenly until 15 all when Hong Kong edged into 16-15 lead at the second technical time-out, from where Hong Kong gradually took the advantage with four points at 22-18 with their attacking, and at that juncture they kept the score until the final 25-19.

Hong Kong jumped out to a quick lead in the second set, winning eight of the first 10 points, and held on for the victory. Hong Kong set the tone in the third set, and led once by as many as seventeen points..

China achieved a crucial win against Chinese Taipei at the third and last match of the day three competition as both teams were undefeated with two wins from as many as matches. China fielded the strongest line-up so far, including 187cm high opposite Zeng Chunlei who just returned from the London Olympics and 192cm high Xue Ming, former middle blocker of the national team.

In the first set, China opened quickly over Chinese Taipei, starting with 8-2 for China, with a great job in the attack and pressure in serve, with 188cm wing spiker Liu Xiaotong clinching five points from attacking and serving and 192cm-high Xue Ming contributing two points. China closed the set with a big 17 points margin, 25-8.

The story was similar in the second and third set. China continued with their same game’s strategy and Chinese Taipei with their same errors at service and reception. With an average height of 188cm, China controlled the net with formidable blocking ability that prevented Chinese Taipei to apply any attacking strategy. China took the mixtures of spectacular spikes from Liu Xiaotong and Zeng Chunlei with the solid blocking from Xue Ming to win the sets with ease at 25-12 and 25-7.

The results are as follows:
Day one

Vote for female opposites and make your...