Russia opened the program on Wednesday in Gdynia by scoring their second win of the tournament after cruising to a rather speedy 3:0 (25-15, 25-21, and 25-17) to edge the still winless Finland. 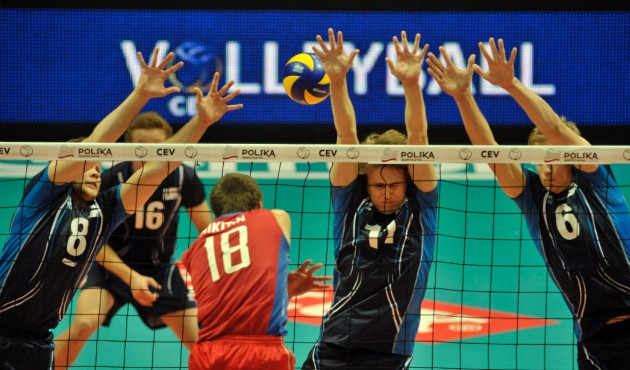 The game started with a minute of silence to commemorate the head coach of Russia’s women’s national team, Sergey Ovchinnikov (44), whose premature death was announced this morning by the Russian media (he apparently committed suicide while being on a training camp in Croatia with the team of Dinamo MOSCOW). The teams actually started out quite nervous by committing many mistakes and the score stayed very close up to 10 all. Russia gradually found their play (16:13) and with the precious contribution of their tallest player, Alexey Kobilev, they eventually cruised to the final 25-15.

Russia quickly got to the front in set 2 (8:5), and all players mentored by Sergey Shlyapnikov did their work properly, even though the above mentioned Kobilev as well as Ivan Demakov were particularly outstanding (16:10). With some substitutions Finland managed to reduce the gap (21:18) but could not stop the run of their opponents who anchored by Kobilev went for the 25-21 that called for the provisional 2:0.

Kobilev set the tone also for the early phases of set 3 (8:4) but then a drop of concentration on the Russian side of the court let Finland come back (9:8). After a time-out, Russia got back on track (12:8) and got to the front by six points at the second technical time-out. That basically determined the fate of the game and Russia could pocket a well-deserved 3-0 win.